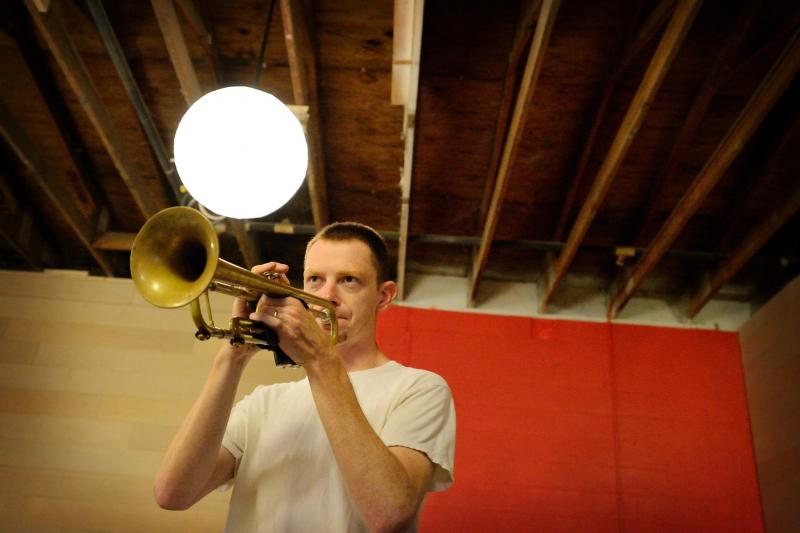 By CRAIG TWEDDELL
November 7, 2013
Sign in to view read count
Meet Craig Tweddell:
Craig Tweddell attended Morehead State University, where he was privileged to study with his hero and mentor Greg Wing, who he credits with instilling within him a work ethic and passion for music that continues to inspire him to this day. Craig discovered and fell in love with jazz music and improvising while at MSU, which he attended on the Musicians' Union Performance Scholarship, and The Jamey Aebersold Jazz Scholarship. He was also a member of the annual KMEA Intercollegiate Jazz Band three times.

After graduating from Morehead State, Craig moved to Louisville, Kentucky where he quickly became a regular member of the Louisville big band scene. He has since become one of the busiest trumpeters in the area and can be heard performing regularly with his own groups and as a sideman. Tweddell is also the host of Louisville's longest running jazz jam session at the historic Rudyard Kipling.

Craig has played with The Temptations, The Jack Wilkins Blue & Green Project, Tierra Cali, Jamey Aebersold, Dick Oatts, Lee Konitz, Dave Samuels, Bennett Higgins, Anderson Pessoa, Alim Nastaev, Bobby Falk, and Mixolegion to name a few. In 2008 and 2009 he was selected as a semi- finalist in the jazz division of the National Trumpet Competition. In 2007 Craig received a full Master's scholarship to attend the Jamey Aebersold Jazz Studies Program at the University of Louisville. There he studied trumpet with Dr. Ansyn Banks and arranging with the great John Labarbera.

In 2013 Craig released his debut album Away With Words on the Vugles Media label.

Your sound and approach to music:
I try to play my version of music that moves me. When I hear something I connect with it— whether it is in a composition or during improvisation—then I try to figure out the source of the connection. I then do my best to mold that source into something of my own in hopes that what I create will connect with others as well.

Your teaching approach:
Every student is different. I treat each student as an individual and try guiding them down their own paths of musical discovery.

Road story: Your best or worst experience:
While on a tour through Russia once a man tried to "hook me up" with his teenage daughter, weird.

Favorite venue:
When it was still open, The Jazz Factory in Louisville.

Your favorite recording in your discography and why?
Away With Words!(Vulges Media, 2013) It's the first album I've released under my own name and it features all original compositions.

The first Jazz album I bought was:
A Louis Armstrong compilation album

What do you think is the most important thing you are contributing musically?
Hopefully a sound that is unique to me as an individual. I also feel that it is important to be as visible as I can in my city so that the people of Louisville can see that jazz is alive and well and that this music isn't just for elderly people.

Did you know...
I was a very serious amateur skateboarder until about the age of 19 when I decided to pursue music.

What are some of the essential requirements to keep jazz alive and growing?
Introduce the music as early—and often as possible to kids— before they are brainwashed by the junk on TV.

What is in the near future?
Play, write, and teach as much possible.

What's your greatest fear when you perform?
That no audience will show to the gig. Luckily this has never happened.

What song would you like played at your funeral?
Charlie Parker's rendition of "Lover Man."

If I weren't a jazz musician, I would be a:
Skateboarder.