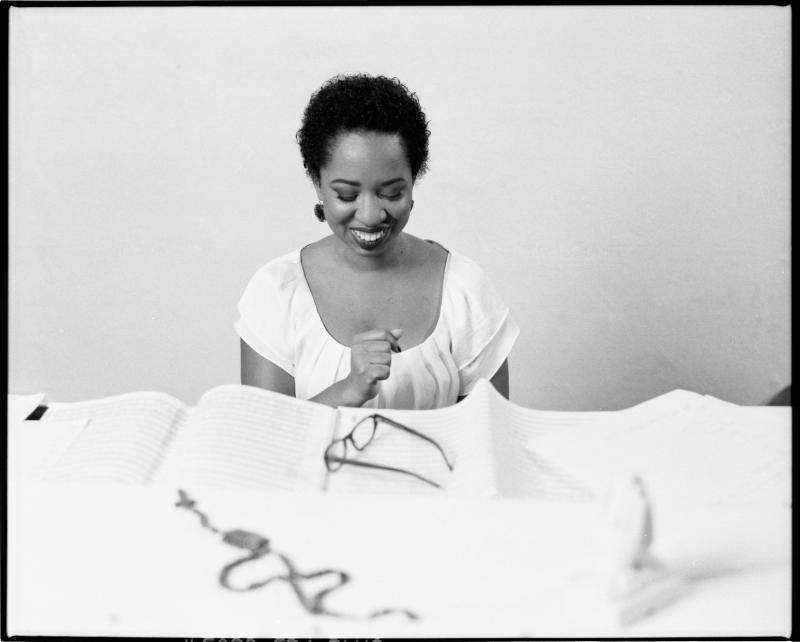 By COURTNEY BRYAN
March 26, 2015
Sign in to view read count
Meet Courtney Bryan:
Courtney Bryan, a native of New Orleans, is "a pianist and composer of panoramic interests" (New York Times). Her music ranges from solo works to large ensembles in the new music and jazz idioms, film scores, and collaborations with dancers, visual artists, writers, and actors. On April 9, 2015, her new work Sanctum for orchestra and recorded sound, commissioned by American Composers Orchestra (ACO), will be given its world premiere by ACO at Jazz at Lincoln Center's Rose Hall, on a program that also includes premieres by Wynton Marsalis and Uri Caine. Sanctum explores the sound of improvisation in Holiness-preaching traditions, and draws inspiration from Pastor Shirley Caesar's 1973 recorded sermon, "The Praying Slave Lady." Bryan says, "By employing techniques of layered repetition, rhythmic intensity, and sounds of moaning and whooping, Sanctum invokes solace found in the midst of persecution and tribulation."

Courtney Bryan performs around the New York area, and is the Director of the Institute of Sacred Music at Bethany Baptist Church of Newark, NJ. Dr. Bryan has academic degrees from Oberlin Conservatory (BM), Rutgers University (MM), and recently completed a DMA in music composition at Columbia University of New York, with advisor George Lewis. Bryan has been an instructor at Columbia University and Oberlin Conservatory, and is currently a Postdoctoral Research Associate in the Center for African American Studies at Princeton University. She was a participant in ACO's Jazz Composers Orchestra Institute in 2012.   Bryan's work has been presented in a wide range of venues, including Lincoln Center, Miller Theatre, The Stone, Roulette Intermedium, National Gallery of Art, Blue Note Jazz Club, Jazz Gallery, and Bethany and Abyssinian Baptist Churches. She has two recordings, Quest for Freedom (2007) and This Little Light of Mine (2010). In addition to her new work for ACO, recent commissions include Prophetika, a collaboration with Charlotte Brathwaite and Abigail DeVille.

Who were your main teachers and influences?
I have so many amazing teachers that have had a profound impact on me! Some of my major music teachers include professors George Lewis, Fred Lerdahl, Stanley Cowell, Wendell Logan, Jeffrey Mumford, Marcus Belgrave, Billy Hart, Frances Walker, Clyde Kerr, Jr., Daniel Weilbaecher, Dean Curtis, Roger Dickerson, Kidd Jordan, Kent Jordan, Germaine Bazzle, Moses Hogan, and Ellis Marsalis. I also have studied music related topics with professors Susan Boynton, Ellie Hisama, Farah Griffin, Robert O'Meally and various faculty at Columbia University Department of Music, Jazz Studies Center, Institute for Research in African-American Studies, and the Institute for Religion, Culture, and Public Life; Rutgers University Jazz Studies in New Brunswick and Newark; Oberlin Conservatory and College; New Orleans Center or the Creative Arts and the Louis "Satchmo" Armstrong Jazz Camp. Then of course there are the many recordings I have studied that have influenced me as well as those who trained me as a church musician, including Lillian Whitaker, Rodney Smith, and the Bethany Baptist Church of Newark NJ choir; Jessie Reeder and the Rust Methodist Church of Oberlin OH choir; and the complete St. Luke's Episcopal Church of New Orleans LA choir, as well as my experiences at other churches.

I knew I wanted to be a musician when...
My mama said I came out singing. Whether that's true or not, I have always loved music. I started off imitating my sisters Amy and Alma by studying piano, and then fell deeply in love with the instrument.

Describe your approach to music.
I approach music as a chance to unite the head and the heart, and I take seriously my role as a healer.

Do you teach?  If so, what is your teaching philosophy?
Yes, I love teaching. I seek to guide the student performer or composer towards the development of his or her improvisational/compositional skills and individual voice. I basically integrate the various approaches of my own teachers, and encourage the integration of technical, theoretical, and historical aspects of the music.

Describe your best or worst experience on the road.
The road so far for me was graduate school, and it definitely was a journey!

What's your favorite venue to play at?
I prefer any venue that allows the artists freedom to express themselves, and encourages the audience to feel comfortable. I like playing in concert halls, churches, clubs, and festivals. The balance of those types of venues is fulfilling for me.

What is your favorite album in your discography, and why?
Hmm, that is difficult. But, I choose A Love Supreme by John Coltrane.

What do you think is the most important thing you are contributing musically?
I would describe my musical aesthetic as one of convergence. As a composer-improviser, I explore a wide array of influences, find common elements, and fully integrate these elements into my creative process. My work is in conversation with various musical genres, including jazz and other types of experimental music, as well as traditional gospel, spirituals, and hymns. Focusing on bridging the sacred and the secular, my recent compositions explore human emotions through sound, confronting the challenge of notating the feeling of improvisation.

The first jazz album I bought was...
At home we had albums of Duke Ellington, Billie Holiday, Ella Fitzgerald, and John Coltrane. Those are my first memories of jazz albums. The first I remember buying and listening to non-stop was McCoy Tyner's The Real McCoy!

What music are you listening to now—list up to five albums:
It will change dramatically depending on the hour of the day.

How would you describe the state of jazz today?
Ever changing and evolving

What projects do you have coming up in the near future?
Sanctum for orchestra and recorded sound (world premiere)—American Composers Orchestra at Jazz at Lincoln Center—April 9 at 8pm.

If I weren't a musician I'd be a...
As a child, I considered being a microbiologist. In general though, if not music, I would remain in the healing field some way or another.