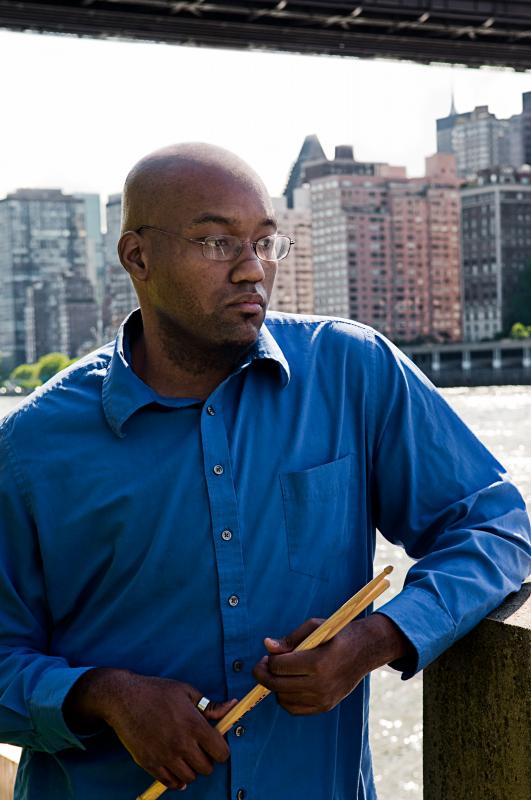 Donald Harrison Jr. Since then, he has performed with such renowned artists as Dave Holland, Joe Lovano, members of the Lincoln Center Jazz Orchestra, Birdland Big Band and members of The Cleveland Jazz Orchestra, as well as many other great players.

He is currently a Spectra Jazz recording artist residing in the New York City area and performing with/leading his modern jazz group, The Nue Jazz Project. He has performed in many venues across New York City, such as Smoke, Cleopatra's Needle, Smalls, Fat Cat, 55bar, The Garage, The Iridium and many others.

Teachers and/or influences? Growing up I had my share of private lesson instructors like any suburban youth does in the band program and they all had their influences on me in one way or another especially my 1st instructor Phil Zampino. But my most influential instructor didn't come until far later when I was in college. A man by the name of Cedric "Shed" Hobbs.

Cedric was a relatively unknown drummer who had worked most of his life in a steel mill in the greater Youngstown, Ohio area. However, he was a phenomenal jazz musician who was the go-to drummer in town if someone of note ever came through and in his earlier year had played with the likes of Charlie Parker, Dizzy Gillespie and Charles Mingus. He to me was the embodiment of what jazz was. His feel and time concepts opened my mind to the infinite possibility of the music.

Today my main drumming influences are I would say Art Blakey, Jeff "Tain" Watts and Elvin Jones. These are three drummers who, no matter who they play with or in what setting, their sound and concept behind the kit is instantly recognizable. It is what I strive for in my playing. To be truly unique and not just sound like a carbon copy of what has come before me but instead an amalgamation of concepts and historic precepts.

I knew I wanted to be a musician when... You know, I would love to say I have always known that I wanted to be a musician but in truth it wasn't until I was about 16, when I decided being a musician is the path I wanted to choose professionally. My father is a scientist and my mother is a nurse, and while they both had fantastic taste in music (everything from Brahms to Bootsy Collins was played in my household) they were not musicians themselves. Although my decision did not come as a shock to anyone.

Growing up I had a natural affinity towards music especially in a percussive sense. I was a kinetic child that always was tapping on this and that. Finally my parents signed me up for drum lessons and from then on I fell in love with the instrument.

Your sound and approach to music: Art Blakey said something once that has stuck in my head since I was about 17. "I put my sound underneath a player." Those words really resonated with me as a drummer.

"All is one and one is all" is my philosophy behind my role on the band stand. The groups that have been transcendent in music history are so because of their dynamic with each other. I try to meld with any group that I perform with and act as the catalyst or fuel for the group in terms of intensity.

There is an old saying: "You cannot outplay a drummer, so don't try." Because the drums have the greatest dynamic range of a typical jazz ensemble I consider my role in the group as "keeper of the flame"; stoking the fire as needed to either create blistering heat or gentle warmth. Elvin Jones was a master at this and much of my concept comes from his connection he had with John Coltrane's group.

There are so many fantastic artists out there it is hard to name all of them off of the top of my head. Kenny Garrett and Terence Blanchard both come to mind as artists I would love to get the opportunity to perform with some day. I would also love to play with the Wayne Shorter group (Danilo Pérez, John Patitucci, and Wayne) because I feel, hands-down, that they are the most musically inspiring jazz group out there right now.

Road story: Your best or worst experience: Well gigging regularly in NYC has its share of ups and downs indeed. In reality as a drummer living in the city the whole experience can be quite a hassle. Many venues don't have a full backline which means I am either lugging my 150lbs of drum equipment on the NY Subway system, or spending a large portion of the money I make on the gig for cab fare to and from the performance. This makes for a very precocious situation as a freelance musician in NYC.

Actually my favorite venues here in the NYC to play at are the ones that have Japanese owners. Many venue/booking managers here are quite elusive and do not want to be bothered with things such as...doing their job and booking a good jazz group. However the Japanese owners I have met with are very humble to the musicians and really treat you as if you are an artist and not just a product to bring warm bodies in the door. After contacting a venue owner to book a show they actually invited me down to their club and provided me a free dinner just to meet me in person to have a chat and a handshake before I performed there.

In an age where many clubs are not even offering a comped drink to the band seeing a venue that actually goes out of their way for the artist like that is truly worth noting.

Your favorite recording in your discography and why? Well, "Galactus" is my favorite recording out of my works thus far. I feel it really sets the tone for my concepts of sound, melody versus harmony, and intensity that I feel needs to be brought back to jazz music as a whole. Every time that tune is performed on a gig the crowd is always tapping their foot, bobbing their heads, or even dancing (which is impressive, given the song is in seven).

The first Jazz album I bought was: Herbie Hancock, The New Standard. I remember listening to that for the first time when I was about 15, and not understanding what was going on at all—conceptually or musically. My dad had a healthy collection of Cannonball Adderley, Miles Davis and Coltrane, that I listened to alongside James Brown, Stevie Wonder and Sly and the Family Stone growing up, so I was no stranger to the sound of jazz music. But that was the first album I remember purchasing on my own that really made me dive into the music.

What do you think is the most important thing you are contributing musically? Simplicity. Jazz has gotten away from itself in the last few years (most of this is due to the influx of academically minded college grads), and is becoming more and more of a disconnect with the average listener.

Music is a conversation. A universal communicative effort. So even if you are a master linguist if you only speak in tongues then no one will get what you are saying or, more to the point, care about what you have to say. History's greatest humanistic speakers (be it actual speech, art, or music) were all masters at making the complex understandable and relate able to the human condition.

Swing hard and make the listeners tap their feet. Simple.

Well you may or may not know this about me (if you are clever or a good "Googler" then you would know) is that I am a huge nerd for all things comics and sci-fi. I get it from my father who is a scientist. Some of my fondest memories of him actually are of us sitting on the couch when I was a youngster and watching episodes of Star Trek: The Next Generation.

How would you describe the state of jazz today? Jazz is in a state of identity crisis today. There seems to be a schism of the traditionalists versus the new wave of avant-garde/fusion artists. Those who believe that if it doesn't swing then it isn't jazz, and those who believe jazz in and of itself is really an abstract term that loosely defines improvisational music.

There has been a very sharp disconnect in the recent decades with jazz and the African-American community only to be picked up by suburban white youth, who have taken their academic backgrounds and molded the music into their image. Much of what I hear coming from many young groups sounds a lot like chamber music with jazz-related instruments.

What are some of the essential requirements to keep jazz alive and growing? Jazz is a genre of music that is such to evolve as society evolves. However, truly keep what we know of as jazz alive it needs to reconnect with the common listener. Young up and coming players need to realize it is not about writing tunes in the most abstract meter or complex series of chromatic progressions you can think of that make you "hip." It is that feeling you give the listener that makes them tap their feet, bob their heads, or leave the gig with a melody in their minds. This is key to the success and growth of the music.

What is in the near future? I have just finished a wave of new compositions and plan to hit the studio again for my second album as a leader. Also, since signing with Spectra Records, I am planning a series of upcoming tours on the East Coast and Midwest. Check out my website for more up-to-date details.