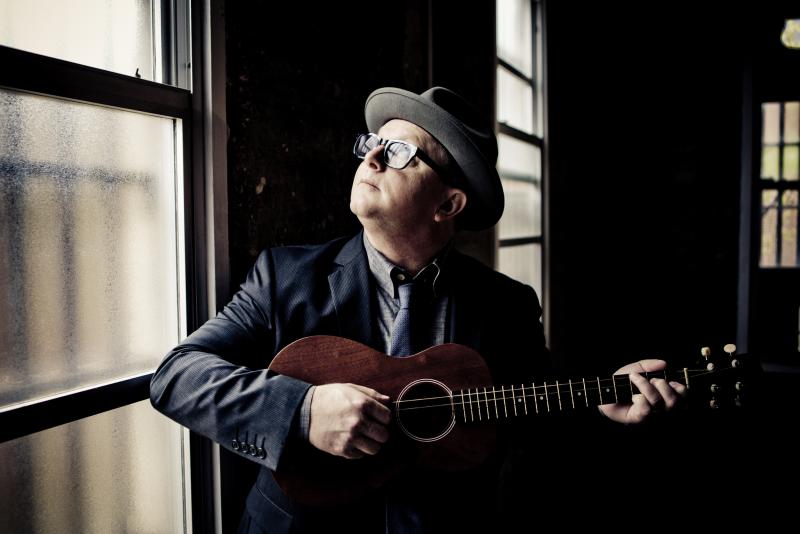 His first release, Love Press Ex-Curio (Thirty Tigers, 2005) was followed by Arc of The Circle (Runway Network, 2008), a duet recording with saxophonist Jeff Coffin. Each recording reached the Top 5 on the CMJ Jazz Chart and amply provide clues to Peacock's unique solo piano approach, which is now fully revealed on Lemonade.

Peacock has performed and recorded with notable jazz artists like Don Alias, Bela Fleck, Ravi Coltrane, Marc Ribot, and Victor Wooten. In addition to his unique solo efforts, Charlie Peacock has played a lead role in creating major chart hits in three separate decades, most notably Amy Grant's "Every Heartbeat," Switchfoot's "Dare You To Move," The Civil War's gold certifed debut album Barton Hollow (Sensibility, 2011), which earned a Grammy for Best Folk Album and Country duo, and the 2013 Billboard topping debut, The Civil Wars (Columbia, 2013). The producer's most recent credit is production and arranging of "Misery Chain," performed by Chris Cornell of Soundgarden (featuring Joy Williams) for the 12 years As A Slave soundtrack (Columbia, 2013).

Teachers and/or influences?
My father, trumpeter/educator, Bill Ashworth and a grammar and high school educator named Dean Estabrook who taught me music theory in high school. Dr. Frank Kofsky, educator and former editor of the Jazz & Pop magazine was a strong influence also. Dr. Kofsky took me to Keystone Korner in San Francisco and allowed me to help him with interviews when he was writing his column for the San Francisco Chronicle. I specifically remember going to Andrew Hill's home for the afternoon and would claim his playing as a huge influence along with Keith Jarrett (Facing You (ECM, 1972) in particular). Other piano influences include Carla Bley, Joe Sample, Ray Bryant, Chuck Leavell, Bill Evans, Ahmad Jamal, Jackson Browne, and Chick Corea to name a few.

I knew I wanted to be a musician when...
I first heard my father rehearsing with his band in the garage. The Beatles on Ed Sullivan sealed the deal. Next came my parent's Columbia Record club discs and finding out about Miles Davis and Thelonious Monk, who were two artists they seemed to feature quite a bit. I loved it all.

Your sound and approach to music:
My approach to music is very broad and inclusive. I am a classic eclectic with an emphasis on American music. As a record producer, I tend to work with simpler rhythmic and harmonic forms, but my ear loves complexity as well. As a result, I've learned to move comfortably between the poles of simplicity and complexity and all points in between in production, composition, and my playing.

I try to major in what is emotive and evocative rather than what is technically accurate or correct. As far as improvising goes, even with the obvious influences, I've tried to do something a little different with the left hand by outlining chords in 5ths and 6ths and avoiding the jazz pedagogy voicings that my generation all learned back in the day. I love the chordal genius of Herbie Hancock and Bill Evans, but because I usually produce much simpler music, it's allowed me a contentment with less complex harmonies. This is probably why my sound is a little less anchored in a particular time in jazz history—that's what I hope for anyway.

Your teaching approach:
My teaching philosophy is very much like house building. I start with the foundation and build up from there to greater and greater detail, complexity, nuance, contradiction, and randomness. In addition, I don't just teach facts, but ideas within varying contexts supported by overarching ideas about the nature of humanness and living in this planet.

Your dream band:
I think my dream band would be one that I compose for... a big band, so let me cast the players based on that. The drummer would have to be Brian Blade, either James Genus or Mike Elizondo on bass, guitars would be Annie Clark and Jerry McPherson, Ralph Alessi on trumpet, Jeff Coffin on tenor, Don Byron on clarinet, my cousin Tom Ashworth on trombone, Jeff Taylor on accordion, pump organ, and misc. instruments, and Danny Lanois on pedal steel.

I would play piano and Rhodes. I'd want some vocalists to write for minimal lyrics more about tone and emotion, in that case I'd pick Joy Williams from The Civil Wars, Mikky Ekko, Lenachka, and my son Sam Ashworth.

A long time collaborator, Tony Miracle, would oversee a synth and processing station using modular synthesis and laptop plug-ins. Carla Bley would consult and be our sage muse, because she knows the drill. What's that...17 people with me? I guess I'll be buying a couple of busses for the road also.

Road story: Your best or worst experience:
Worst is probably the obligatory band van crash in the snow on the Pennsylvania Turnpike in the dead of winter. I was an opening act for either the Fixx or General Public and were following them, several hours behind the buses. We lived to tell the tale, but I haven't done well in ice and snow since then.

Best or funniest might have been opening up for the Sun Ra Arkestra. I was playing with Jeff Sipe and Jeff Coffin among others and right in the middle of a song, Marshall Allen just came on blowing and redirected all energies towards him. You had to smile—no harm no foul.

Favorite venue:
My favorite venue of all time is gone now! A little hipster/political watering hole in Sacramento called Maurice's American Bar. It was where I learned so much of my craft, playing a whole variety of music from sons of Miles electric jams to singer-songwriter stuff. Hats off to Steve Holsapple and Maurice Read who gave me my start there.

Recently, I played just outside of Chicago at a place called Space, which is wonderful in every way. In NYC, I like the second room at Rockwood Music Hall (Ken Rockwood is a great music supporter) and the Jazz Standard. There's a tiny little theater in Livonia, Michigan called Trinity that is one of the best sounding rooms I've ever played in even though it only seats about 60 people.

My favorite recording is Arc of the Circle with Jeff Coffin. Mostly likely because it does well what I attempt to do everyday, which is to make music that is some magical mix of improvisation and composition—or ordering of improvisation if you will.

The first Jazz album I bought was:
Bitches Brew (Columbia, 1970) by Miles Davis.

What do you think is the most important thing you are contributing musically?
It's hard to step into that kid of self-assessment. I'm aware that my reach is wide, so I guess I would emphasize it. I'm keeping a comprehensive view of musical stewardship alive in a time of compartmentalization and the extreme segregation of niche and genre.

Did you know...
My father Bill Ashworth used to teach with bassist Marc Johnson's father, Howard, an amazing jazz pianist. I first met Marc when he had just started playing with Bill Evans. Fortunately for Marc, Howard played just like Bill and knew the material.

How would you describe the state of jazz today?
Well it's certainly nothing like the jazz of my youth in therms of '60s and '70s jazz culture and innovation. However, we know it has a certain degree of health because many of the necessary institutions are still working—if not prospering—like festivals, grants, education, magazines, web presence, Grammy presence, some essential jazz clubs in large urban centers, and more.

What is missing is the full weight of innovation that jazz has the ability to foster and the unique way it can feed other genres of music. The last 30 years or more have been largely about the codification of form and function based on the best and the brightest elements of modern jazz past. I still hunger for the feeling of "Well, I've never heard anything like that before!" It's out there with people like Vijay Iyer, Rudresh Mahanthappa, and others. But you can't string a hundred names together of people that are moving the music forward in extraordinary ways and you could have in decades past.

I gave my heard and mind to jazz for that reason, and it's still the inspiration I turn to today when I'm looking to re-invent pop music in unique ways. I guess it's the scout/pioneer approach over the settler approach. It's time for a new breed of scouts.

What are some of the essential requirements to keep jazz alive and growing?
The best climate for jazz has always been a unique combination of tradition, innovation, and experimental vision casting. The absence of mystery in any human system leads to predictability and rote definition of form and function and jazz is not immune. Fear does not work also. Jazz grows in an environment where mystery and freedom are celebrated, so we certainly need a return to that sort of party.

We also live in a time when virtuosity is discouraged. Music has never needed senseless wanking, but you don't get Charlie Parker, John Coltrane, Keith Jarrett, Jaco Pastorius, or John McLaughlin without allowance for virtuosity and an expansion of what can be done on an instrument and basically what humans might achieve if they apply themselves.

What is in the near future?
. My newest recording is titled Lemonade. It is a collection of solo piano improvisations. I tried to use the ones that I felt combined the best compositional ar with the improvisation. Apart from that release, I'm acting as the music director for Soundgarden's Chris Cornel as he and Joy Williams from the The Civil Wars promote their song from the soundtrack to the Golden Globe nominated film, 12 Years A Slave. And of course, I'm in the studio producing a slate of projects for 2013, including a wonderful new pop singer named Lenachka.

What's your greatest fear when you perform?
Forgetting the lyrics when I'm singing. Not being in the moment and being tense when I'm soloing.

What song would you like played at your funeral?
"Someday My Prince Will Come" and "Great Is Thy Faithfulness."

What is your favorite song to whistle or sing in the shower?
The one I've just written.

By Day:
Still making records, one day at a time.

If I weren't a jazz musician, I would be a:
Clothing designer, an organic gardener, a fishing guide, an architect, an inventor of any number of things, or a teacher.