Raised In Salem, MO where he started playing, Grant attended Missouri State University in Springfield, MO, earning a Bachelors of Music Education and most of a Masters of Music in Conducting (here's hoping for August). Grant has taught at public schools in Branson, Eldorado Springs and Odessa, MO and is currently in his first year as the Director of Instrumental Music in Sedalia, MO. 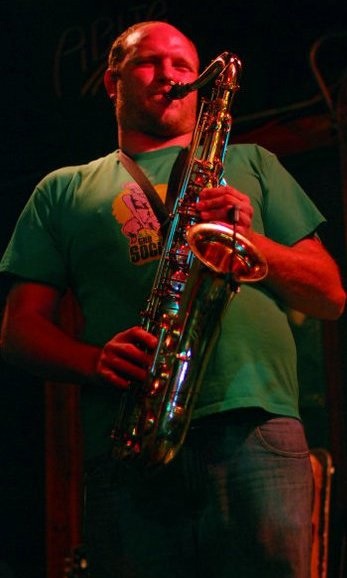 Literally the very first time I opened the case on my first tenor in the sixth grade. I opened it and knew everything else was over.

I believe that standards are still being created, that we can't consider the great American songbook complete. Music from the last 25 years is every bit as open to improvisation as stuff from the previous 80.

I believe in a lifetime approach both in large ensemble settings and in individual lessons. It's not just about the next concert or audition, but about gaining skills and knowledge that will assist them in their playing for the rest of their life, which is how long I want them to keep it up.

I've been working on a youngblood brass band tribute for about four years (by working on I mean putting it off). That and a group with scheduling availability.

Some of the Jah Roots stuff is crazy to me, on one of the albums I hadn't actually heard the song before we started rolling and they didn't let me go back and re-track anything, so it's essentially me sight-reading without any charts. I'm very proud of the Greene Coast work, but kind of feel like it'll be this next album that I like the most.

I bought Stan Getz's Anniversary and Art Blakey and The Jazz Messengers' Greatest Hits at the same time.

I read a ton of fiction. Fantasy, Sci-Fi, mystery, thriller, whatever, but probably four books a week on a slow week.

I'm working on an album of all (or mostly) trio work, and it's getting to be time to schedule our summer (we work close to four times as much from May to August).

I teach band and orchestra in Sedalia, MO.