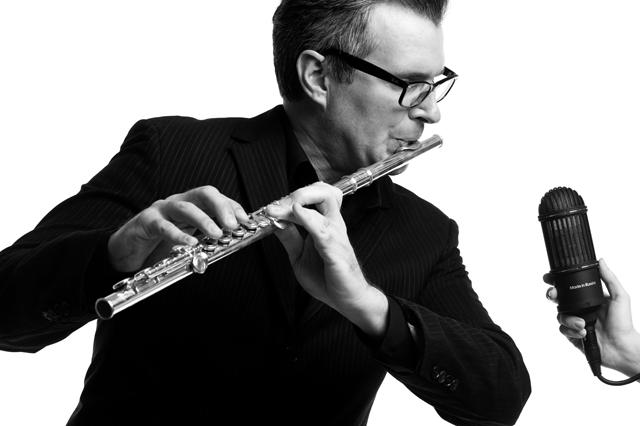 Teachers and/or influences? I've been very much influenced by the Zen approach of Miles Davis: It's what you don't play that can be as important as what you play. As far as teachers, piano guru (and Berklee teaching alum)Ted Howe is largely responsible for my jazz piano "technique," such as it is, and the ability to read lead sheets and make something useful of them. As for flute, I finally saw the light after years of being self-taught, and started studying with Sam Skelton, Director of Jazz Studies and Lecturer in Saxophone at Atlanta's Kennesaw State University. I wish I had done that sooner!

I knew I wanted to be a musician when... I think my first interest in music was when we got one of those Wurlitzer "Fun Center" home organs back when I was about four years old...you know: one of those things that had the different rhythm buttons and all that... My dad (who played trombone during the Big Band era) taught me "The Star Spangled Banner" by ear. I wanted to play the pipe organ at church, but I was too young; so I started taking piano lessons instead.

Your sound and approach to music: I love world music, and try to bring some fresh sounds and influences into my compositions. At the end of the day, I want my music to be accessible, but don't want any of my tunes sound like a clone of something else. I think the more I go along, the more I believe that less is more, and that if all the parts work, you don't need to keep glopping tracks on top of it. As a "Nu-Jazz" artist, though, I'm not religious about having to record everything live at one time. There's a lot to be said for that, and there's a definite magic to the vibe of acoustic instruments in the same room—which is one reason I love the flute and piano—but I'm cool with technology and whatever gets the job done. I love some of the stuff like Jazzanova and World Lounge.

I'm working with my dream band! But I'd love to work with Steve Gadd and Manu Katche, and if I were just playing flute (and not keyboards), it would be awesome to have Chick Corea or Herbie Hancock. I hate that I'll never have a chance to play with Michael Brecker. And Miles, of course! (And while I'm at it, Thelonious Monk, Charles Mingus and John Coltrane...)

ADVERTISEMENT
Road story: Your best or worst experience: I've played naked before. But that was back in the day, in a funk rock band.

Your favorite recording in your discography and why? The current CD, Guiro!, is my favorite, as it's the best snapshot of where I'm at right now; but I'm very much looking forward to the next one.

The first Jazz album I bought was: Probably either Kind of Blue or one of 'Trane's albums...although my folks had some Stan Kenton and Dave Brubeck and similar singles around the house when I was young.

The Caribbean Jazz Project, The Gathering;

Something with Dave Valentin.

How would you describe the state of jazz today? There's a lot of great stuff going on. I have to say that some of the Smooth Jazz stuff I'm not terribly fond of...I hear some stuff that's just like sonic wallpaper to me. I'm totally cool with that being totally valid as music to relax to and whatnot; but I think a lot of the classic jazz guys might object to that being called "jazz."

What are some of the essential requirements to keep jazz alive and growing? I think, to paraphrase various comments I heard Miles make (and to which I agree), jazz has to keep changing and evolving if it's going to be a living language. That doesn't necessarily mean that technology has to be involved; but that may be part of it in some cases. I love acoustic jazz, though...and the trick there is to not get stuck re-doing things that have already been done, just because you have the same instrumentation.

What is in the near future? I expect to release the next CD around April 2011, in time for the Spring festival season.

I also own a multimedia company that caters to the legal and medical industries.