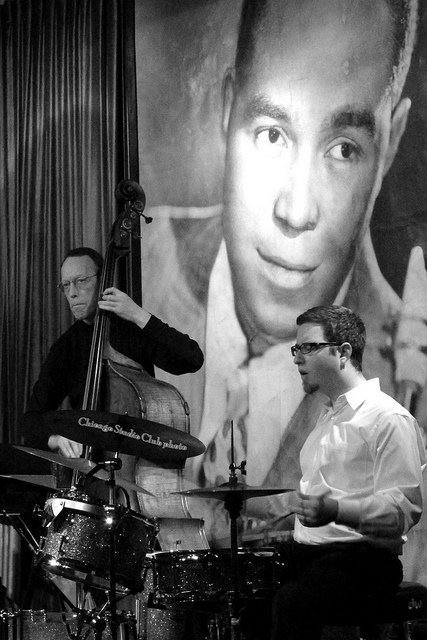 Ben Scholz is a drummer and percussionist who lives and works in Chicago, Illinois. A native of Portland, Oregon, Ben began playing classical piano at eight years of age and continued his studies through college. When he was in middle school his grandparents found his dad's snare drum, a gift William Ludwig Sr. had given his grandfather back in the early '60s. Ben joined the school band and continued with various percussion and mallet instruments.

While attending high school and working a sub in the Pacific Northwest music scene, Ben became interested in jazz. He was accepted to University of North Texas where he studied with renowned jazz instructor, Ed Soph. After graduating, Ben moved to Chicago and found success as a drummer as well as a teacher. He frequently works in television and has appeared on MTV, WGN-9, and at Second City.

Ben also holds the position of Booking Manager for Blujazz Productions and is a part-time faculty member at Loyola Academy High School. Living in Chicago has given him the opportunity to work with jazz innovators like Roy Hargrove, Esperanza Spalding, Francois Moutin, Bill Watrous, and Aaron Neville.

I knew I wanted to be a musician when...
I have been playing and performing music since I began taking classical piano lessons in third grade.

Your sound and approach to music:
My latest release was recorded with the jazz-fusion project, The Elec Tet. We brought in guitarist Oz Noy to record with us and was produced by Greg Spero. My approach to creating music has always been to strive to make music that moves people. Whether good or bad, I want people to have a reaction to what we create as an ensemble.

Your teaching approach:
There is no substitute for a good teacher.

Your dream band:
I'd love an opportunity to work with someone like Chick Corea or Herbie Hancock.

Road story: Your best or worst experience:
It's always a great experience to return to a city I've lived in like Portland or Chicago and perform for friends and family. One time, we were wrapping up a gig in Wisconsin and the owner tried to give us cocaine instead of cash as payment. Not cool.

Favorite venue:
The Jazz Showcase in Chicago is always great. Earlier this spring I did a master class at The Musician's Institute in Hollywood. Most of their performance halls have separation between the soundboards and the stages. The acoustics were unreal.

Your favorite recording in your discography and why?
Shiny Metal Objects is our latest release, and by far the most extensive in terms of production. Oz Noy's guitar work was phenomenal.

What do you think is the most important thing you are contributing musically?
Lately, it has been difficult for musicians to record and perform with people outside of their immediate locations. By viewing major artistic events as investments, I'm hoping to bring people together who would not normally have the opportunity to perform as a group.

Did you know...
I have a miniature- pinscher.

How would you describe the state of jazz today?
Changing and very difficult to profit from.

What are some of the essential requirements to keep jazz alive and growing?
Live concert attendance. Recording and releasing albums.

What is in the near future?
We will be attending APAP as we do every year in NY. I'm looking at doing an east coast tour to promote the album as well.

What's your greatest fear when you perform?
My fear is always that I won't have an audience.

What song would you like played at your funeral?
"The Chicken Dance."

What is your favorite song to whistle or sing in the shower?
"Hava Nagila."

By Day:
Booking and artist management for Blujazz Productions.

If I weren't a jazz musician, I would be a:
Lawyer.