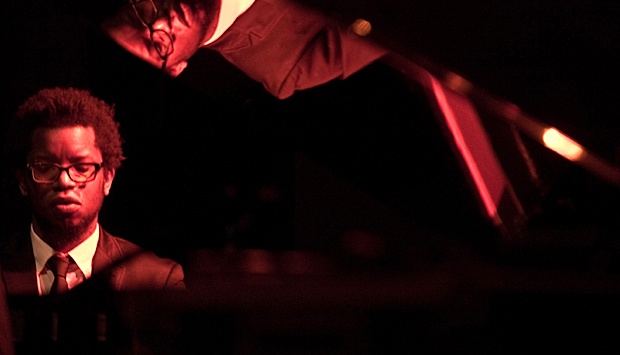 By ARUAN ORTIZ
April 19, 2013
Sign in to view read count
Meet Aruan Ortiz: Named "the latest Cuban wunderkind to arrive in the United States" by BET Jazz, this classically trained violist and pianist from Santiago de Cuba, considers himself "a curious person who loves music," and portrays his music as an architectural structure of sounds, incorporating contemporary classical music, Afro-Cuban rhythms, and improvisation as primary material for his compositions. He has received a number of awards such as Latin Jazz Corner's Arranger of the Year 2011 for his contribution on the album, El Cumbanchero (Jazzheads 2011) by flutist Mark Weinstein; Best Jazz Interpretation, Festival de Jazz in Vic, Spain (2000); and Semifinalist, Jas Hennessy Piano Solo Competition, Montreux, Switzerland (2001).

I knew I wanted to be a musician when... When I heard Dizzy Gillespie and Gonzalo Rubalcaba duo on the Festival de Jazz Plaza in Cuba.

Your sound and approach to music: Without barriers from the rooted blues feel to the most Avant-garde contemporary classical music... All in one song.

Your teaching approach: Helping to be themselves, and to trust and listen to their own voice.

Your dream band: I'm blessed to have had the opportunity to play with great individuals that have shaped and expanded my musical vision like the Roney's brothers, Don Byron, Greg Osby, Terry Lyne Carrington, the great Cameron Brown, among others, so I'm very thankful for that. However, it would be such an honor to share the stage with creative minds and musical innovators such as Dr. Yusef Lateef, Anthony Braxton, Roscoe Mitchell, Ornette Coleman, Oliver Lake, Reggie Workman, Ron Carter and Wayne Shorter.

Road story: Your best or worst experience: With the Wallace Roney Band... playing at Burlington, Iowa after driving for about 15 hours and discovering that they had the worst out-of-tune piano ever. It was funny because they were a small jazz community with very supportive fans in that town.

Favorite venue: I've played in some very nice venues but I think Pizza Express in London and Casa del Jazz in Rome are two of the best—great pianos and an amazing vibe. In the US, Dakota Jazz Club & Restaurant in Minneapolis and Jazz Standard and Smoke Jazz Club & Lounge in NYC.

Your favorite recording in your discography and why? I like all my recordings for one reason or another. Each of them has something different to look at it, and they were recorded in different times of my career. But I like Aruán Ortiz Trio Vol. 1 which was recorded in Boston, just around the time of my arrival in the US. It was with Peter Slavov and Francisco Mela—we were all living in Boston then and it was such an intense session resulting in a very nice recording. I also like Alameda and Orbiting for their fearless approach, Santiarican Blues Suite for the concept behind the music, Banned in London for its energy, and Textures and Pulsations for its curiosity.

The first Jazz album I bought was: The first album I actually bought was Kenny Garrett's Songbook in 1997. I just arrived in Spain from Cuba and knew Kenny's work from audio cassettes in Cuba, so I was very excited when I saw his new recording and realized I was able to buy it.

What do you think is the most important thing you are contributing musically? I bring my life experiences, my personal journey from my hometown in Santiago de Cuba (through Spain, France, Boston and now Brooklyn); my critical thinking and curiosity. I learn everyday from my teachers, mentors and the masters of this art form, and follow their legacy. So I haven't contributed musically anything yet, but ask me the same question in 50 years... :)

Did you know... I played viola for almost 17 years and I played as a soloist with the local Symphony Orchestra from my home town.

Desert Island picks: Tough question, but just to name a few: Any Thelonious Monk's album;
Any Andrew Hill's album;
Any Herbie Hancock's album;
Any Miles Davis from 1957 to 1970;
Any album conducted by Pierre Boulez;
Don Cherry's Togetherness and Old and New Dreams;
Love Supreme and any Trane album after that recording, and a long etc...

How would you describe the state of jazz today? We should go back and believe in jazz as a folk art form, celebrate the masters, and push forward the boundaries of this music from its essence.

What are some of the essential requirements to keep jazz alive and growing? Keep the curiosity alive.

What is in the near future? A monthly series I'm curating at DROM in NYC entitled "Music & Architecture," inspired by rituals and concepts of materials such as fractals, reflections in water, piece within a piece, Arabesques, etc.

The Aruán Ortiz Quartet featuring David Gilmore, Rashaan Carter and Eric McPherson will be at the Atlanta Jazz Festival 2013, promoting our album Orbiting and on tour in Europe this fall.

What's your greatest fear when you perform? My only fear is not to create a channel between me and the audience, where I can transmit to them the message from my music.

What song would you like played at your funeral? Oh my... I haven't thought about it yet...

What is your favorite song to whistle or sing in the shower? Whatever is in my mind at the moment... lately I was whistling "What's This" from the Soundtrack of Nightmare before Christmas by Tim Burton. My son likes that movie!

By Day: Practice, practice and practice... that's my day job :)

If I weren't a jazz musician, I would be a: Something that could heal and touch the soul of people.