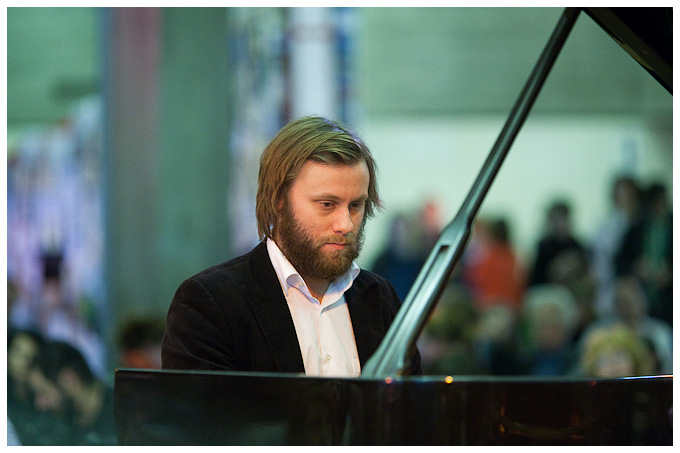 view slideshow
By ANDREAS ULVO
October 21, 2011
Sign in to view read count
Meet Andreas Ulvo:
Despite his young age, Andreas Ulvo (b.1983), from Eidskog in Hedmark, has already made a mark for himself on the Norwegian and European jazz scenes. His main projects are his own solo piano project and Eple Trio. Together with the two other members of Eple Trio, he has a Masters degree in improvisation and jazz from the Norwegian Academy of Music. Ulvo also works with other bands/artists like the Mathias Eick Quintet,Karl Seglem and Froy Aagre.

I knew I wanted to be a musician when...
I never really knew it, it was just the way it went,.

Your sound and approach to music:
Mimimalistic, poetic, dramatic, silent and sometimes loud.

Your dream band:
My dream band should be a band sounding like no other band

Your favorite recording in your discography and why?
I think it would be my latest release, the solo record Light & Loneliness, first of all because it's a very important and personal album for me. It was recorded at my parents' house, at the old Grotrian Steinweg piano on which I learned to play.

The first Jazz album I bought was:
I don't remember what album that was my first, but one of the first I remember listening a lot to was Keith Jarrett Trio, Tokyo '96. The intro from "Summer Night" still haunts me from time to time.

What do you think is the most important thing you are contributing musically?
If people are inspired by my work, if they feel like crying, dancing or making a painting, that's the greatest compliment for me. To convey beauty.

Did you know...
I'm also a photographer.

What is in the near future?
I'm working on writing music for an ensemble that I've been wanting to work with for many years. I won't say anything else at the moment, but I'm really looking forward to it.