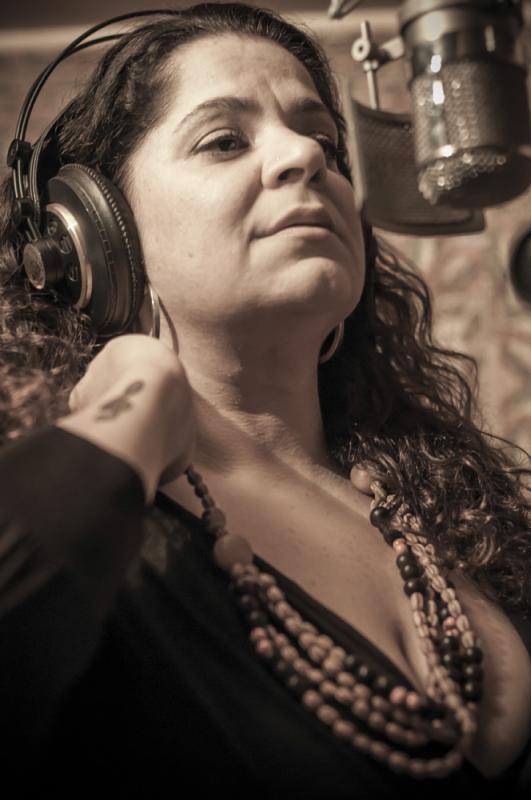 Andréa Dutra is a Brazilian singer from Rio de Janeiro. Her most important influences are MPB (popular Brazilian music), samba and jazz. She has worked with many important Brazilian musicians like Tim Maia, Seu Jorge, Sandra de Sa, Danilo Caymmi and others, all over Brazil. Andrea was nominated for the most important music award in Brazil for her first album, Andréa Dutra, released by Niteréi Discos in 1993.

Since 2001 Andrea sings in the samba vocal quartet Arranco De Varsóvia, winner of the most important music award in Brazil, as Best Samba Group of the Year, in 2006, with the album Na Cadencia do Samba. In 2010 , the group launched their fifth CD and first DVD, recorded live, Paozinho de Acucar: Arranco De Varsóvia Canta Martinho da Vila, in which they sang exclusively the music of the great samba composer Martinho da Vila. The DVD features Martinho himself on stage with Arranco.

In 2005, Andréa Dutra and pianist Paulo Malaguti played Brazilian jazz at the Versailles Palace as part of The Year of Brazil in France. Andréa was in You Record's Soul of Brazil album, and was pre-nominated for the Latin Grammy, category Best Song, for her song, "Disseram." Throughout her career, she has been performing in all important clubs and theatres in Rio and Sao Paulo.

The Andréa Dutra Quartet played at Modern Sound Mega Store for five years, having received visitor musicians from all over the world, like American drummer Mike Shapiro. You can hear Andréa on Grammy Award-winner Gaudencio Thiago de Mello's album, Amor Mais que Perfeito, side by side with Ithamara Koorax. In 2007, SalaDeSom records released O Amor de uns Tempos pra Ca, featuring Andréa Dutra in duo with guitarist Marcus Nabuco. "A Linha e o Linho," by Gilberto Gil and included on the album, was featured on the original soundtrack of Tititi, a soap opera on Rede Globo TV.

The Andréea Dutra Quartet celebrates its twelfth year together, resident at the Triboz Club, in Lapa, Rio de Janeiro, experimenting with jazz and Brazilian jazz, with a faithful audience.

In February, 2013, Mills Records released Andréa Dutra's new album, Jamba, an original mix of jazz, samba and Brazilian jazz, that ends up sounding like what we choose to call Brazilian universal music. The album shows how Brazilian music can use elements of jazz, like improvisation and reharmonization, to enhance its beauty without ever losing its Brazilian accent and characteristics. In fact, it's clear to see how jazz and Brazilian music have exchanged—influencing and being influenced by each other.

The tracks are a mix of previously unreleased songs by Dutra and other composers, and new versions of tunes by Djavan, Moacir Santos, Monarco, Vinicius de Moraes, Caetano Veloso, Fatima Guedes and other great Brazilian composers.

I had abandoned advertising college, had started studying piano and singing, and had started singing as a backing vocal in Rio. I was 21, living in Paris, working as a babysitter and studying music by myself, listening to all the jazz I could find, attending concerts and I feeling that music was worth coming back home to. Although I had already started to sing here and there before I traveled, it was only when I came back to Rio that it became clear that I should take it seriously and study. So I threw myself in music, and never looked back. It's been 25 years now.

I listened to everything. My father liked Burt Bacharach, Romanticos de Cuba, brass ensembles and Italian romantic music. My mother listened to Brazilian MPB, Gal Costa, Maria Bethania, Chico Buarque, and a little Barbra Streisand and Domenico Modugno. Then I lived in London and became bilingual, which helped me to ease the language barrier. My sister listened to Cat Stevens, The Beatles, progressive rock and classical. I grew up in the disco years, despite being in Brazil. I listened to a lot of American music on the radio. Then I started to listen to jazz, and did that for years. And still do, most of the time. But I rarely listen to singers.

I fell in love with soul music, listened to it for years, and sang it for years; researched Brazilian soul music, and wrote my own music. I also had some jazz standards gigs, recorded some albums, never released. Parallel to that, I used to have friends in samba groups, and went out a lot with them in rodas de samba and sang in blocos. In 2001 I joined Arranco De Varsóvia, a samba vocal quartet, where I've been singing for 12 years now.

My solo gig, Andréa Dutra Quarteto has been going on for 12 years now; we play a lot together and after so many shows and gigs and freedom to experiment, we've ended up with a very personal mix of jazz and samba, a very Brazilian kind of jazz.

Went to sing in Paris in a duo, and had arranged to receive the payment before the show. In the morning, the producers stopped by and left the money with my pianist. He called my hotel room. "They paid double," he said. They thought it was that amount for each of us, and not for both!

Once we had a duo gig, piano and voice. It was our fourth show in that venue. When we arrived for sound check, we found out the piano was gone. And they "forgot" to tell us!

For an intimate mood, I choose the place I'm resident at, Triboz, a wonderful international jazz club in Lapa, Rio, where the audience loves music and the owner, Australian musician Mike Ryan and his wife Jessica, are great hosts and make everyone feel like they're in a friend's house.

For a big space, Teatro Ibirapuera, in Sao Paulo has an awesome structure and a very professional and gentle staff. Perfect sound and acoustics, and backstage is comfy and artists get nice treats.

For a medium space, Teatro Municipal de Niteroi is a nineteen century jewel, perfectly restored and preserved, with great acoustics and piano. The staff is very sweet.

I love my recording of Tom Jobim's "Retrato em Branco e Preto," a very difficult and delicate melody that has to be fully respected and sung, requiring technique and dynamics—skills I cherish so much. I recorded it live in studio and managed to respect the sinuous melody while keeping the emotion very high. Driven by the song, with feet on the ground. It's on my Quarteto Moderno album, from 2003.

In my most recent album, Jamba, just released, I very much like my singing on "Obstinada," a very vigorous samba, with clever words to say and real heat to achieve.

Recording "Moody's Mood" was a dream come true, a song to sing forever, always learning. I felt like an adult woman when I listened to it, having had the courage to record it, for better or worse.

I don't expect to be modern, to innovate, to change. I have my aesthetic choices, the ones that fit, that suit my idea of the music I want to make. I do this for love; it's fuel to me. In search of beauty, of atmosphere, of nice words and wonderful melodies and great rhythm and sowing it all together. Finding the right team of musicians is the key to make great music, it's a group sport. I can't do it alone.

the first time I heard "There Will Never Be Another You," was in Paris' New Morning jazz club, with Chet Baker singing it. Love at first hearing, I learned it immediately. It took me ages to find out what it was; I was only a beginner then, in a pre-web era. I still sing it, 25 years later, and still love it.

The taste and time for music

The launching of my new album, Jamba, in May, starting off in Rio.