By AAJ STAFF
December 3, 2009
Sign in to view read count
Meet Amanda Monaco: Playing guitar has led Amanda Monaco to perform at the Blue Note, The Kennedy Center for the Performing Arts, Birdland, Tonic, Joe's Pub, and the JVC Jazz Festival, as well as other venues in the United States and Europe. Amanda has recorded several CDs as both a leader and a sideman, and has shared the stage with musicians such as Milt Hinton, Matt Wilson, Matana Roberts, and Harvie S. As an educator, Amanda has served on the faculty of Berklee College of Music, The New School, and the National Guitar Workshop and is the author of Jazz Guitar for the Absolute Beginner (Alfred Publishing). Amanda's latest CD, I Think I'll Keep You, was released in 2009 on LateSet Records. 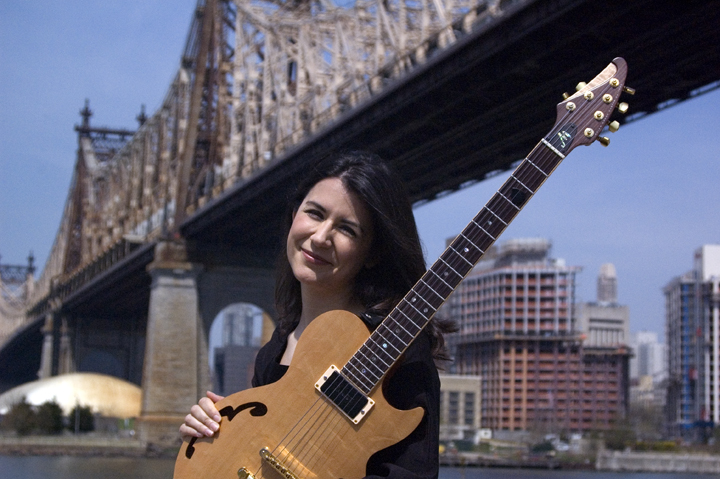 I knew I wanted to be a musician when... I finally got my first guitar after two years of begging for one. Music has always been a big part of my life - I have a large extended family that breaks into song all the time (seriously!) - and I couldn't really imagine doing anything else once I got going with it.

Your teaching approach: Keep it simple. Practice daily. Learn to read (as guitarists who can read music get the gig!).

Your dream band: There are so many amazing musicians out there, I wouldn't know where to begin! This one's going to take a minute.

Road story: Your best or worst experience: One of the funnier things I've experienced: Years ago, I played at an "eating club" event at an Ivy League school, and about halfway through the second set, the singer announced to the crowd, "this next one is slow and sultry; feel free to take your clothes off..."so they did. And as soon as the song was over, they got dressed and kept dancing.

Favorite venue: I really enjoy playing at The Stone; everyone who works there and comes to hear the music adds to a wonderful experience.

Your favorite recording in your discography and why? There's so many, but John McLaughlin's first record, Extrapolation, is one of my favorites. Hearing it forever changed the way I play and compose. It is such a multi-faceted record in the way that it roars and then quiets to a purr and back again.

The first Jazz album I bought was: Kind of Blue by Miles Davis.

Did you know... In high school I did a lot of counted cross stitch, and have some pretty massive designs framed and on the wall in my apartment.

How would you describe the state of jazz today? Jazz sounds great, but the market for it is quite dismal.

What are some of the essential requirements to keep jazz alive and growing? One of the ways jazz keeps "shooting itself in the foot," so to speak, is by marketing itself as something "elite" and almost "untouchable" by the everyday person. Every time I take one of my students to a jazz concert, he/she enjoys it tremendously, but were it not for me, they wouldn't know about it because of the way jazz has become almost invisible in the mainstream world. Somehow we have to saturate the market more, and in a way that makes jazz more appealing to those who would normally shy away from it for reasons that, ultimately, don't really exist (i.e. "too hard to understand" - what's there to understand? - or "I have to know too much about it to listen to it" - why?)

If I weren't a jazz musician, I would be a: Librarian.