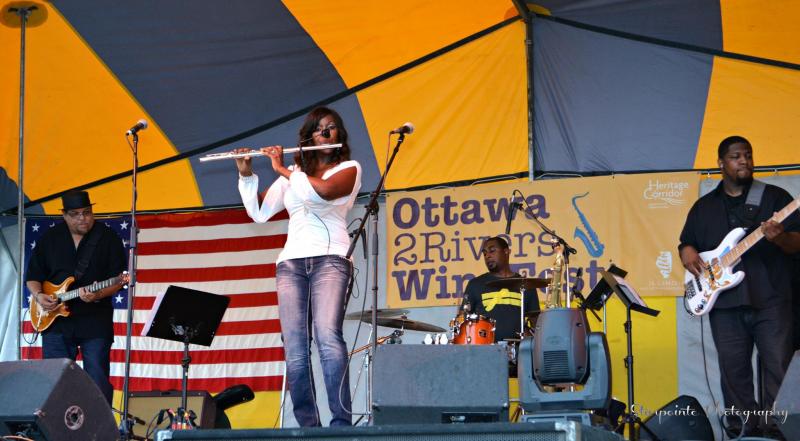 By ALTHEA RENE
June 12, 2015
Sign in to view read count
Meet Althea Rene:
She was born December 25th in Detroit, Michigan and began her musical journey at the tender age four. She studied classical music while attending Howard University in Washington D.C. and later gained further musical inspiration from the accomplishments of Yusef Lateef, Ian Anderson, and her father, one of Motown's original Funk Brothers, Dezie McCullers. Althea has since developed her own creative style. For more than ten years she was employed as a Wayne County Deputy Sheriff (Detroit, Michigan). Today, she is a full-time performing/recording artist and some regard her as a "master of her craft" and one of the world's most exciting solo improvisational flutists.

In May 2013, she released her fifth project In The Flow. Collaborating with Grammy award winning producer Michael Broening, (producer for legendary icons George Benson and Paul McCartney) she cowrote the title track. That single became her biggest hit and reached number one ranking on both the Billboard Chart and the Smooth Jazz Chart. Althea Rene made history by becoming the first flautist in the history of Billboard Chart to reach the number one spot.

In April 2015, Althea Rene recorded her first live project. She and her rhythm section annihilated the stage of the beautiful Detroit Public Library with a free concert. Music fans from all over Michigan enjoyed a scorching hot performance. A compilation of some of her greatest hits, Live in Detroit is arguably her strongest work to date.

Teachers and/or influences?
My Band Teacher, Ernie Rodgers was a great influence and a positive role model.

I knew I wanted to be a musician when...
My sister started playing the flute but didn't like it ...so I picked it up

Your sound and approach to music:
Is very organic, since I didn't learn to play jazz in any school, I was a classical flutist.

Your teaching approach:
I teach students to use all aspects of there senses , to create a story through music.

Your dream band:
I like to work with passionate musicians that are also reliable. I've worked along side of several big name artists, and always enjoy meeting & working with new artists

Road story: Your best or worst experience:
Best time was performing in Dubai, worst experience was flying in for a festival and having it be rained out two years in a row.

What do you think is the most important thing you are contributing musically?
bringing the uniqueness & diversity of the flute and it's ability to be entertaining.

Did you know...
Used to be a Deputy Sheriff in Detroit MI.

How would you describe the state of jazz today?
Not good at all, very hard to make a living.

What are some of the essential requirements to keep jazz alive and growing?
Live shows, live music, diversity in the music.

What is in the near future?
It's a 24 hr. job to promote yourself & reinvent yourself, you must stay in the game.

What's your greatest fear when you perform?
That the band will make mistakes within the music.

What song would you like played at your funeral?
"A Change Gonna Come"

If I weren't a jazz musician, I would be a:
I'd be a hair stylist/make up artist. 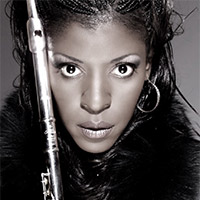