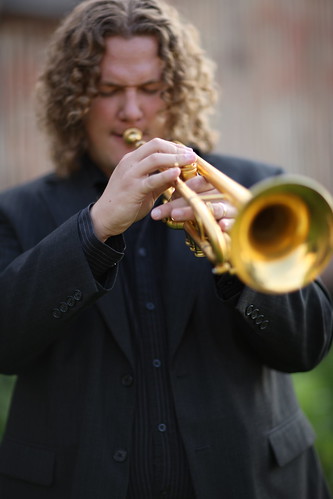 Meet Adam Meckler: Trumpeter, composer and educator Adam Meckler graduated from Lawrence University in Appleton, WI in 2007 with a degree in trumpet performance and an emphasis in jazz studies. He was a member of LU's Down Beat award-winning Jazz Ensemble (2007) and studied privately under the direction of critically acclaimed composer and educator Fred Sturm. He was the recipient of LU's prestigious jazz composition award being inducted in to the Pi Kappa Lambda Honor Society, and Phi Mu Alpha Sinfonia's Leadership in Music award.

Adam and his wife Jana (Nyberg) currently reside in Saint Paul, MN. Adam performs regularly with The Jana Nyberg Group, the Stan Bann Big Band, his own quintet, Con Alma, Nova Modern Jazz Trio, and freelances as a composer and performer. You can find Meckler on the Jana Nyberg Group's latest self-titled album released in March of 2008, and his debut album For Dad.

Fred Sturm has been a huge influence on my improvising and composing. I got to study privately with Fred during my Junior and Senior years at Lawrence University. The biggest influences on my playing have been Dave Douglas, Ingrid Jensen, and Kenny Wheeler. I grew up listening to Louis Armstrong, Miles Davis, Clifford Brown, and Lee Morgan as well. I think my biggest influence both on my composing as improvising has been Dave Douglas. I have spent many, many hours studying his music, and transcribing his solos. Dave's playing and writing is so unique, yet so accessible, which is what first drew me to his music. A technique which is very prominent in Dave's music is how he often blurs the lines between what is written and what is improvised. I often try to draw on those techniques when approaching my own compositions.

I knew I wanted to be a musician from a very early age. My mom (and brother, unfortunately for him we shared a room for many years) tells me I used to sing myself to sleep every night starting when I was very young. When I was eight I asked for a guitar for Christmas and started taking lessons with our church pastor. Somehow guitar fell by the wayside for a few years, I think my dad wanted me to be a pro baseball player. By the time I was in middle school I had moved to Illinois and began playing the trumpet. I remember telling a friend, "I'm going to major in music in college" just before my sixth grade year started. Thinking about it now, I'm surprised I even knew what college was, let along knowing what I was going to major in. That being said, I was right, so...

I'm in it for the music. When I have a great night playing music at a club, or just jamming with friends, I can't sleep at night. I don't know where I'd be without jazz. This music has gotten me through every heartache in my life. It's therapeutic. So, I guess my approach to music is that if I like how it sounds, then I like it. It could be just a pretty folk melody, or some of the most complex math rock, if its played well, and I can feel it, then I like it. So when I approach my own music I try to come up with the most organic melodies, no matter how simple. My melodies tell my story. On the trumpet I love a big dark warm sound. I have spent a lot of time listening to Dave Douglas, and his sound is something that I try to emulate (but not so much that it is nauseating). When I hear Clifford play "Laura," or Lee Morgan play "I Remember Clifford," or Dave play "Poses," I think "I want to sound like that."

I've only been teaching for a few years, so I am not going to try and pretend like I am some kind of expert. That being said, I believe that it is important for teachers to be performing regularly, and for them to remember how it was when they were just starting on their instrument. In lessons, my students spend time listening to music (anything from Maurice Andre to Dave Douglas), playing etudes, scales (majors/minors and pentatonics first), playing by ear, and improvising. I make all my students improvise, even if they are not interested in jazz because improvisation forces you to make musical decisions and commit to them.

My ideal band is a quintet that is enthusiastic about playing my music, with some time to rehearse. I would also like to form bands with other instrumentation to experiment with other styles of music and musical settings. For instance, I would like to form a band made up of trumpet/melodica (yeah, I play melodica too), acoustic bass, bass clarinet, and percussion. I wrote for a band like this one in college some and really enjoyed the sounds we were able to get.
I would love to work with Mike Lewis of Happy Apple someday. And Maria Schneider. Yeah, that'd be nice.

I played in a jam session where Roy Hargrove showed up and played with us. Yeah, didn't sleep that night.

Dave Douglas, Meaning and Mystery. The album is perfectly balanced with a mix of chaotic and harmonious music. The Dave Douglas Quintet is at its best with some of its best improvising and writing to date. I just purchased his Live at the Jazz Standard recordings though, and I've heard they are life-changing. Meaning and Mystery may have found its match in my play lists, we'll have to wait and see.

Ha. Do I have to answer this?

Feeling. Keith Jarrett once said that there was no real technique-based musical reason why Miles Davis had him in his band in the '70s. After all, Chick Corea was already playing with him. Instead he suggested that Miles asked him to be in the band because he added a feeling that didn't exist before he got there. A certain energy that only Keith could have brought to the table. Similarly, I do not believe there is anything that I can bring to the table in terms of ripping through changes and shredding that you haven't already heard. On the other hand, I believe my music can be felt on a deeper level. There is an energy and feeling to my music that you don't find everywhere.

The scene goes so much deeper than I ever could have imagined. Still need venues to play at and people to listen though.

We need to quit being elitists and bring jazz back to the people where it belongs. Russ Johnson once said that we should "never underestimate [our] audience"—people will hang on to your music because, as Dave King once said, "people can sense the intent with which you play, and gravitate towards that," even if the music they are hearing is too complicated for them to understand intellectually. We need to stop charging $50 a ticket to get in to the big jazz concerts and make jazz accessible for the younger generation. This 21+ thing doesn't work out too well either. We've got a very cool thing going, and I would like it if more people would be able to give it a chance.

I just finished an album, a tribute to my father who passed away last February from an unexpected heart attack while playing in his twice a week basketball game. The album is titled For Dad. It's definitely worth checking out. I am working on putting together a tour for my wife's band as well.

I play music, I write music, I practice music, I teach music, and I fill out freakishly long questionnaires on All About Jazz. Sometimes I do some other stuff to bring in some extra cash, but I don't have a "day job." Honestly, and I was just telling this to a friend the other night, I don't see the fuss about being a full time musician. Everyone's always like, "Yeah, but what's your day job? You can't make money playing music, can you?" I say, if you're assertive and talented, there's a way. I'd rather be dead than work a 9-5. I'd be miserable.