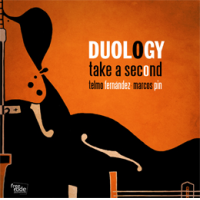 As the name suggests, Take A Second is number two in guitarist Marcos Pin's Duology series. Pin's long-term plan is to record a series of ten albums in duet with a range of musicians. As plans go, it's not the most complicated ever hatched, but the two albums that have so far seen daylight suggest that it's certainly a plan worth putting into practice.

Pin recorded his first Duology album, Session 1 (Free Code Jazz Records, 2014) with pianist Yago Vazquez. As with the collaboration with Vazquez, Take A Second is a collection of jazz standards but this time Pin's musical partner is a fellow guitarist, Telmo Fernandez. Both men favor full-bodied electric guitars, giving their sound an openness and clarity that serves their selected tunes well.

The beauty of this recording lies in the relaxed, companionable, relationship between Pin (playing through the right channel) and Fernandez (on the left channel). The two men exchange licks, trade solos, provide rhythm for the other's melody line—all with a good-humored grace. It's as if J. J. Cale's front porch had been transplanted to rural Spain—although recording actually took place in Estudios A Ponte in Santiago de Compostela in December 2012. According to Pin's liner notes there are rules to the recordings in the Duology series—a single 3-hour session, a maximum of two takes per tune and "no ridiculous edits."

The ten minute version of "Cry Me A River" encapsulates the duo's approach—languid, warm and melodic, their playing accentuates the song's melancholy without losing the beauty of the melody. Despite its extended length, the tune never palls but holds the attention to the last note. "Polkadots And Moonbeams" echoes this laidback, relaxed, approach, "Things Ain't What They Used To Be" gets a slow blues shuffle treatment and "Nica's Dream" moves things a little more up-tempo. The fluid, graceful, rhythm of "I Fall In Love Too Easily" makes this the album's most overtly romantic number.

Old Folks; Nica's Dream; I Wish I Knew; Things Ain't What They Used To Be; Polkadots And Moonbeams; Cry Me A River; I Fall In Love Too Easily.