By DAN BILAWSKY
December 6, 2010
Sign in to view read count 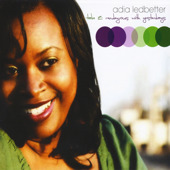 Take 2: Rendezvous With Yesterdays is a journey through songs of yesteryear with some interesting personal detours thrown into the itinerary from vocalist Adia Ledbetter. Eight years after her first album, Ledbetter returns and uses her sophomore effort as a descriptive odyssey of where she came from, where she is and where she is going.

As the album gets underway, with a medley of Ledbetter's "Closer" and "You And The Night And The Music," she seems to be a bit hesitant with her musical intentions. Thankfully, she loosens up by the end of the performance and it's smooth sailing from that point on. Pianist Ed Paolantonio is central to the success of "Darn That Dream," providing just the right touches to this tender performance, but the real eye-opener on the album is "Beautiful Love." Shifting entrances and focal points characterize this winning performance. The song begins with a cappella vocals, gains a lift with the band entrance, narrows the lens to focus on Ledbetter during her scatting and ends up zooming in on Freeman Ledbetter for his enjoyable bass solo. It's difficult to bring something new to this song—and even more difficult to bring something new and musically rewarding into this music—but Ledbetter succeeds on both counts.

Once Ledbetter reaches the mid-point on the album, she moves toward more intimate environs with several duo performances. Both Ledbetters deliver their A-game on "I Can't Give You Anything But Love," with sublime scat work, fine bass soloing and unique vocal phrasing as part of the package. Ledbetter's voice becomes more focused and gentle at the outset of "I'm Gonna Laugh You Right Out Of My Life"—a duet with guitarist Justin C. Martin—but she proves to be in control throughout, adding subtle nuances to her delivery. The title track—a largely-spoken word sermon and speech on self-realization, the state of the world, the great vocalists of jazz and giving thanks to those who have helped Ledbetter along the way—might have worked better as a liner note essay than a fully realized piece of music, but Ledbetter forges on with the help of Martin. "These Foolish Things," beginning with a waltzing swing sound—a la "All Blues—and ending up in a more excitable feel, is a real treat and the album ends on a personal note with Ledbetter's "Only One." Take 2: Rendezvous With Yesterdays might rely on songs of the past, but it showcases a bright talent of tomorrow, in the form of vocalist Adia Ledbetter.

Closer/You And The Night And The Music; Darn That Dream; Beautiful Love; Can't Help Lovin' Dat Mine Of Mine; I Can't Give You Anything But Love; Lady Bird; I'm Gonna Laugh You Right Out Of My Life; Rendezvous With Yesterdays; These Foolish Things; Only One.