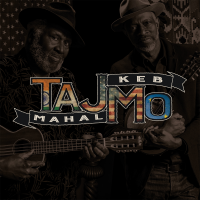 When two generations of blues giants as Taj Mahal and Keb' Mo' teamed up for the production TajMo, the best of both personalities and talents merged for an adventurous take on traditional blues. Taj Mahal's recording trajectory goes back to the late 1960's, when he released Taj Mahal, quickly followed by The Natch'l Blues, both on the Columbia label. These two records would establish his career, which in the ensuing years would meander through reggae, folk, world music, jazz and other genres, while firmly rooted in acoustic blues. Keb' Mo' has maintained his affinity for country blues, stemming from his self-titled Okeh debut in 1994, on which he covered two Robert Johnson tunes. Twenty plus years and twelve albums later, Keb' Mo's joining up with his idol and mentor Taj Mahal, is a milestone event, emphasizing the vitality and relevance of the blues.

This project took over two years to be completed, due to the duo's complicated scheduling and commitments. The sessions were recorded in Nashville, with an array of accompanying musicians adding a contemporary touch to the mix. A nostalgic yearning for down home Mississippi, is the central theme for "Don't Leave Me Here," the up-tempo opener, accentuated by an emphatic horn section, and the wailing harmonica of Billy Branch. Mahal and Mo' get to show their guitar expertise and alternating vocal fluidity on the ribald classic "She Knows How To Rock Me," originally penned by Piano Red aka Doctor Feelgood, reworked here as a rural rocker. A resplendent choir is employed for "All Around The World," underscored again by the hard hitting horns charts.

ADVERTISEMENT
An undulating rhythm and the soothing voice of Lizz Wright are featured on "Om Sweet Om," a gentle nod to enjoying the natural world. Electric guitar ace Joe Walsh is brought in to liven up "Shake Me In Your Arms," while slide guitars and a mandolin highlight "That's Who I Am." Mahal reprises "Diving Duck Blues," composed by Sleepy John Estes, but popularized by Mahal on his second album, where he kicked it up a few notches. This version is pure traditional blues, just Mahal on acoustic guitar and Mo' on a Resonator, singing and playing off of each other in a relaxed mood. The big surprise number, is Pete Townsend's "Squeeze Box," from the '75 release The Who By Numbers. The song is totally renovated into a syncopated zydeco arrangement, accented by the accordion facility of Jeff Taylor, and supplementary percussion by Sheila E. The soul side of the blues is represented on "Ain't Nobody Talkin,'" spiced up by expressive organ chords, and a sensuous Latin cadence. Percussion is again the main ingredient on "Soul," which draws from both Africa and Cuba, Mahal tapping into his world music experiences and influences, in an international homage to soul power everywhere. As expected, and providing a soft exit, John Mayer's "Waiting For The World To Change," is injected with a gospel tinged message of hope, adorned by Bonnie Raitt on vocals, for a proper closure of the set.

This was a natural collaboration that was destined to happen. Taj Mahal and Keb' Mo' have great mutual respect for each other, and an unwavering conviction in the music they represent. Their guitar playing and singing are also similar in style and substance, complimenting one another. This recording contains honest interpretations of a singular American art form, performed by two legitimate giants of the blues.

Track Listing: Don’t Leave Me Here; She Knows How To Rock Me; All Around the World; Om Sweet Om; Shake Me In Your Arms; That’s Who I Am; Diving Duck Blues; Squeeze Box; Ain’t Nobody Talkin’; Waiting On The World To Change.