By BRAD GLANDEN
September 24, 2006
Sign in to view read count 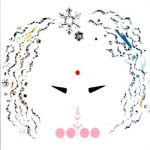 A basic principle of science is that experiments are bound to fail as often as they succeed, a point usually glazed over by devotees of experimental music. Because the cookie-cutter recording industry thrives on the preservation of niche markets, artists who refuse to play it safe receive automatic approval from many outsider music enthusiasts.

Take the Japanese outfit OOIOO: they're weird enough to guarantee a dedicated audience of fringe listeners, but even with a vast supply of unusual sounds at their disposal, they lack the focus to arrange those sounds into a structurally coherent piece of music. Taiga is a big silly grin of an album, one that boasts moments of sun-drenched brilliance, but ultimately it's a well-upholstered vehicle that doesn't go anywhere.

OOIOO was formed in 1995 by versatile multi-instrumentalist Yoshimi P-We, whose membership in Osaka's legendary Boredoms contributed heavily to their gradual shift from hysterical Dadaist noise to trance-inducing psychedelia. Yoshimi's propulsive drumming powered Super Ae (1998) and Vision Creation Newsun (2001), the Boredoms' enduring neo-Krautrock tours de force on the Birdman label. OOIOO, meanwhile, has served as an outlet for Yoshimi's creative whims, and she is now the only remaining original member of the all-girl quartet.

Taiga is a kitchen-sink production embracing punk, funk, new wave, bubblegum, psychotronic jazz, Latin and African rhythms, chants, and island music. The disc is so jam-packed with Japanese jollity that to bemoan its incoherence seems excessively ill-tempered. Indeed, when Yoshimi and company keep the repetitious jams to a reasonable length, their jarring transitions are all the more effective. For example, just as "UJA" has lulled the listener into a trance, the band launches into a gleefully spastic new wave takeoff complete with kitschy analog synths. On the flip side of the coin, "SAI" is an overstretched Mission Impossible pastiche that, for all its sonic playfulness, accomplishes far too little to justify its fifteen-minute running time.

OOIOO is a square peg in an industry of round holes. That is enough to win the esteem of avant-rock adherents, but discriminating listeners might opt to wait until the band's experiments have yielded richer rewards. Taiga starts and ends with joyous energy; how fitting that the trajectory of the album should bear the shape of a smile. There are a few worthwhile surprises along the way, but most surprisingly, the disc occasionally provokes a response one wouldn't expect from listening to a Boredom—namely, boredom itself.