By EYAL HAREUVENI
August 14, 2009
Sign in to view read count 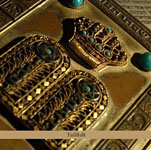 This innovative alt-klezmer/alt-Jewish music ensemble represents the growing interest of John Zorn's Tzadik label in the Israeli Jewish music scene. Tafillalt fits into the Radical Jewish Culture series of the label, not only by exploring and interpreting ancient and modern Hebrew prayers—songs in adventurous and compelling new soundscapes—but also because of the group's multicultural improvisational attitude that borrows from neighboring cultures, Muslim and Christian musical traditions, and consciously references them.

The trio excels in its surprising fresh interpretations of well-known songs and prayers in a way that assimilates past multicultural ensembles innovations. Think Oregon, or John McLaughlin's Shakti, as well as Peter Gabriel's collaborations with musicians from around the world. There's also reference to Lebanese oudist Rabih Abou-Khalil and his sophisticated fusion of Middle-Eastern scales with Andalusian music and jazz, as well as Zorn's assorted Masada project incarnations.

Niv's spare arrangement of Israeli poet Rachel's poem "Gan Naul (A Garden Locked)" transforms this emotional song from its secular, desperate love setting into a contemplative hymn. Taffilalt's arrangement of the famous piyut of love and desire for God, "Yedid Nefesh (Beloved of my Soul)," skips organically between Middle-Eastern musical traditions— Moroccan and Iraqi— and Ashkenazi traditions with gentle Indian overtones. The arrangement to Ronen Shapira's "Tefilla (Prayer)," based on a text by the Greek poet Constantine P. Cavafy, is one of the most impressive ones, as it captures the raging feeling of loss of a beloved soul and doubt in existence of God. The arrangement of the modern Israeli song "Shedemati (My Field)," in which the original melody is an attempt to fuse Hassidic niggun with Bedouin tunes, distances the melody from its innocent cross-cultural lines and dresses it as a repetitive minimalist melody that stresses its European roots.

The sixteen prayers and songs are edited cleverly as one long medley that represents the many facets of ancient and Jewish life: religion, secularity, celebrating life and doubting the existence of the divine, and even tolerance towards other cultures. It is an impressive debut by a very promising trio.

Dawn; I Will Extol Thee; A Garden Locked; Wonder; Beloved of My Soul; Open the Gate; The Amendment; Restore our Judges; Prayer; River; My Field; Stand Beside Us; My Doe; Moses; One and Most High; Messiah.