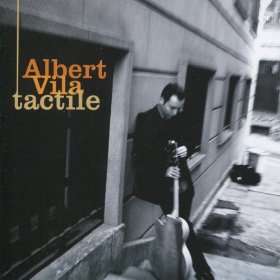 Barcelona-based guitarist Albert Vila doesn't buy into the idea of generic compositions that go down easy, but result in a hunger for more substantial aural nourishment. Vila makes music with the utmost care and concern for texture, taste and dramatic development, and each one of his compositions is a mini-odyssey through his mind.

Vila's debut album—Foreground Music (Fresh Sound, 2007)—was a quintet outing that highlighted the guitarist's unique writing and, while a pair of personnel changes help to give Tactile a different sound, this record proves to be a logical evolutionary step in Vila's artistic journey. Each one of his compositions tells a story, and each narrative is full of twists and turns,

One piece opens with a meditation for guitar and ends with gentle, hypnotic patterns ("Signs"), while another moves from relaxed swing to a more aggressive environment with a completely dissimilar groove ("Now"), but through it all, Vila and his band manage to maintain a fairly consistent ensemble sound. The lone exception is the album-ending "Transgenic." This slice of relaxed, funky, R&B-influenced jazz is modern groove music all the way. With Roger Mas' understated Fender Rhodes work and Marc Ayza's straightforward drumming, this proves to be one of the simplest numbers on the record, but simple—in this case—proves to be extremely effective. Saxophonist Santi De La Rubia lights things up toward the end of the track, upping the soul quotient significantly.

While Vila's compositions define the record, his guitar work is at the center of each piece. His clean toned, single note lines move comfortably over the rhythm section and he blends beautifully with Santi De La Rubia's saxophone lines. While he maintains a consistent tone and touch throughout the record, he alters his style to fit the mood of each piece. His solo on the waltzing "Blue" begins in a fairly laid back state, but in other places, Vila flies over the rhythm section with speedy and articulate runs that show off his technique and provide a boost of energy in the music.

While tactile is a good word to describe this music, no single word can define Vila's work. Through it all, Albert Vila manages to sculpt musical creations that speak to the senses and soul, and provide a window into his own unique world.