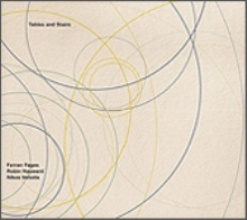 Recorded in June 2010, Tables and Stairs captures an informal trio concert that took place in an Athens apartment at the conclusion of the city's TOT1.0 festival. The trio consists of Ferran Fages, from Barcelona, on sine waves, Robin Hayward, from Berlin, on microtonal tuba, and Athenian Nikos Veliotis on cello, the first time that the three had played together.

The music consists of one continuous piece lasting just under thirty-two minutes. Although not sub-divided into tracks, it has a clear structure to it, with four distinct sections, each about eight minutes long. The transitions between these sections are slow and subtle—more evolutions than jumps—thus giving the piece the advantage of combining variety with overall unity. In fact, slow evolution typifies the music throughout; there is nothing shocking, surprising or jarring here.

The piece opens tentatively, with each of the three staking out their territory by laying down their distinctive sounds, including Hayward's profoundly bass microtonal tuba, Veliotis's almost as deep bowed cello, and the relatively higher pitches of Fages' sines. The effect is similar to a chef displaying the ingredients of a recipe that are about to be combined together into something distinct from each of them, and more complex. Gradually, the contrasting sounds start to overlap each other without fully reacting to one another, hinting at what is possible when they do.

At around the eight-minute mark, as they move into the second quarter, Hayward generates a thrumming bass drone that acts as a solid foundation. The cello answers with its own low sustained drone, just distinguishable from the tuba, although the two combine effectively, both serving the same function, underpinning. At a frequency just high enough to be clear of them, Fages also produces drones. If the three were to have continued in this vein for the duration of the album, it would have been thoroughly satisfying.

Instead, rather than each persisting with their drone, they gradually introduce variety and variation, each, in turn, coming to the fore as the most prominent sound. Such interludes are punctuated by further drones, giving the overall effect of an ensemble that occasionally allows solo space to individual players. Surprisingly, the ensemble drones are so rich in texture and detail that rather than "just being there" they draw the ear in, to interact with them and unpick them. Their low frequency rumble taps into instinctual feelings of menace—the trademark sound of many a scary movie.

For the piece's final quarter, the mood gradually lightens. With the bass frequencies more subdued, Fages employs sine waves of different frequencies in a dialogue reminiscent of animal calls. A slow final fade concludes a rich listening experience—one that can only be adequately followed by repeating it immediately. Already a candidate for the end-of-year lists.