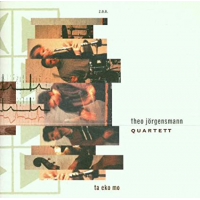 This is a non-traditional quartet (the leader on clarinet, plus vibes, double bass, and drums/percussion) playing very non-traditional music. It's quite free-form and avant-garde. Except for the fact that there is plenty of improvization contained herein, it really bears little connection to jazz. Those who favor such traditional concepts as a melody, a recognizable meter (let alone anything swinging), and identifiable chord changes should look elsewhere. But it you favor envelope-pushing experimental music, you should give this a listen.

Despite the lack of more traditional jazz forms, the music is actually quite sonorous. The clarinet and vibes are pleasant to the ears, and nowhere do the players engage in the honking and squawking often heard in "outside" music. The musicians are all sufficiently accomplished on their instruments, and all four quartet members share in the compositional credits. They get bonus points for creating "outside the box." (z.o.o. 29-1)