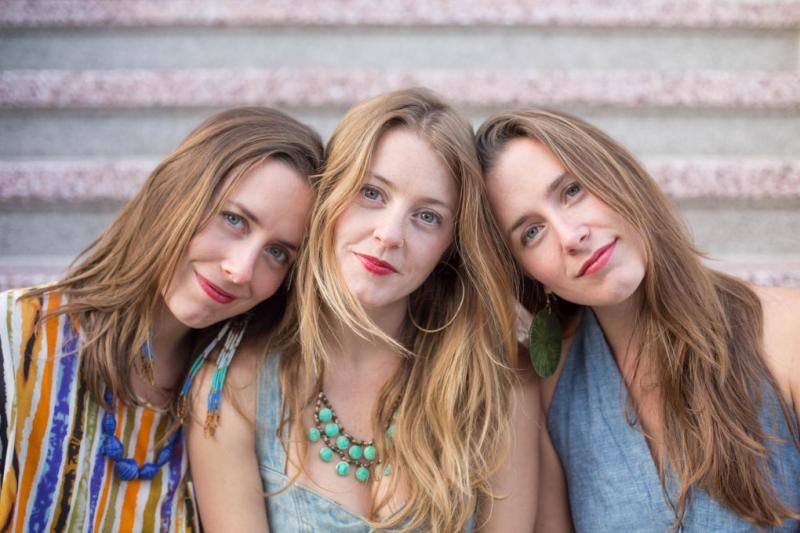 You don't often hear a banjo and washboard at the SFJAZZ Center, but the T Sisters were invited for a reason. Since their debut EP in 2012, Erika, Chloe, and Rachel Tietjen have busily ricocheted between Bay Area venues, propelled by a joyous stage presence and more than enough expertise to satisfy the lofty musicianship standards of San Francisco's foremost jazz institution.

Born and raised in the East Bay, the Sisters play roots music with the modern aesthetic typical of Californian bands like Nickel Creek—rural, by virtue of their instrumentation, but far from redneck. Americana (particularly folk and bluegrass) has a strong presence and history in California, but it isn't ubiquitous the way it is in its homeland, Real America. Thus, Californian musicians must actively seek an environment to learn and create roots music, and this top-down approach tends to yield a more holistic range of influences. Indeed, the T-Sisters meld a swath of traditional American music forms that is broad enough to merit the blanket term "Americana." For their set at SFJAZZ the band mostly played tunes from their new LP due out this fall, in which they further expand their American repertoire by dialing up elements of rock, blues, soul, and of course, jazz.

The Joe Henderson Lab, where the performance took place, is petite, stylish fishbowl. 100 seats form rows before an elevated stage, and the whole room is flanked by soundproof glass walls that invite a direct view from the sidewalk. Fortunately, the set was so captivating that I instantly forgot about the scores of pedestrians watching me bob up and down. The T-Sisters radiate infectious warmth, and the intimate setting allowed them to fully saturate the room with the earnest, playful vibes that define their performative spirit.

The Tietjens' sisterhood was visible in their stage banter but glaringly evident in their vocal blend. With matching pipes that were apparent from the first soul-drenched chorus of Marvin Gaye's "You're All I Need to Get By," the T Sisters showcased the enduring appeal of the three-part harmonizations that are their trademark, driving force, and main attraction. Songwriting and arranging aside, the Sisters simply produce a gorgeous, memorable vocal sound. Their three voices are stylistically distinguishable but have uncannily similar timbres (especially the twins Chloe and Rachel, who sound as identical as they look). They pronounce syllables in the same way and even complement one another's vibrato speed. When the three sing together, as they have for decades now, they achieve a pristine unity that is usually only possible if a singer double- tracks herself in studio.

So in short, the sister thing is no gimmick. The a capella rendition of "Don't Worry 'Bout a Thing" best exposed their effortless cohesion, with staggeringly accurate timing on each note, despite the occasional dramatic stretching of the tempo. When "Shadoop" subjected the Sisters to an obstacle course of modulations they hit each key shift with gusto and facility.

The greatest virtue of the T Sisters' vocal chemistry revealed itself as the show progressed: their collective sound is chalk full of character. For a solo singer an original sound is almost inevitable, but when voices combine their idiosyncrasies begin to average out. When the Tietjens join forces, however, the resulting harmony retains the distinctiveness, flexibility and personality of each sister's solo voice. The Sisters sing with the crisp translucence of Aoife O'Donovan, and in combination they add a sunny robustness without sacrificing clarity. They waxed sultry on the old time number "My Man is a Thief" and slipped into a Grateful Dead-style unbridled jam for the folk standard "Going Down The Road Feeling Bad." Effectively, the T-Sisters function like a single voice, reflecting different parts of their collective personality with each song.

Details like these exemplify the understated brand of virtuosity evident in roots music. The broad American tradition they belong to values community and accessibility, rewarding trained expertise without mandating it. Instead of setting out to drop jaws, the T Sisters simply aim to hit home with material that is emotive and euphonious. Their set at SFJAZZ reassembled morsels from the Americana grab bag into fresh numbers with old timey integrity.