By BRUCE LINDSAY
March 5, 2013
Sign in to view read count 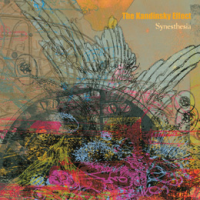 A band whose members hail from the USA and France, a band name taken from that of a Russian painter, a recording studio in Iceland and tune titles that reference an English town ("Brighton"), a Mexican souvenir retailer ("Mexican Gift Shop") and a Danish film director ("Lars Von Trier"). They all give the Kandinsky Effect's second album, Synesthesia, a distinctly international flavor. The music continues this global theme, drawing its inspiration from contemporary dance and electronic musics, as well as from jazz, to create tunes that reflect their times rather than a single geographical location.

This lineup of the Kandinsky Effect—saxophonist and chief composer Warren Walker, bassist Gaël Petrina and drummer Caleb Dolister—came together in 2010 when original drummer Gautier Garrigue left the band soon after its debut release, The Kandinsky Effect (SNP Records, 2010), to be replaced by SNP Records boss Dolister. Although Walker and Petrina are credited with "effects" and Dolister with the use of a laptop, Synesthesia is far from being an electronics-led album. The effects are often used sparingly, or to create subtle shifts in tone or mood; when the balance tips in favor of electronic rather than acoustic sounds, the Kandinsky Effect's indebtedness to contemporary dance music becomes more overt.

The music on Synesthesia has an impressive range as a result of this varied mix of electronic and acoustic. "Brighton" and "Cusba" show the band at its most acoustic—lovely slices of laidback jazz. Walker's warm-toned tenor saxophone is to the fore on both tunes, but Petrina's "Brighton" is also enlivened by the bassist's upper register playing. "WK51" sits in the Kandinsky Effect's musical middle ground, Walker's smooth saxophone melody counterpointed by Dolister's rapid-fire percussion. The opening bars of "Left Over Shoes," one of two compositions by Dolister, is dominated by his loose-yet-funky drum groove before electronic effects combine with acoustic instrumentation to deliver one of the album's more dance-flavored tunes.

Synesthesia is an inventive album, a relatively rare example of an egalitarian mix of acoustic and electronic sounds. The Kandinsky Effect manages this tricky combination with confidence, crafting music that stimulates the brain and the dancing shoes simultaneously.