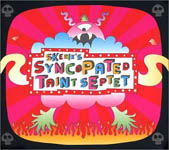 Lots of people talk about dirty funk, but few of them know. Usually they mean the New Orleans variety, swamp funk that leaves silty mud between your toes. Sometimes the Philadelphia kind, all sweat, grease, and dust. But Seattle funk is a different thing entirely—it's all about throwing clods of rooty sod around, playing catch with earthen pieces of the rainforest.

Seattle saxophonist Skerik (no second name) chose a five horn front line for his Syncopated Taint Septet, which means a lot of voices stand out in front here. They work together through their share of arranged parts, but much of the time the band seems to be exercising discretion (or not) within the game of improvisation. The parts where discretion is thrown to the wind are the best, naturally, and in this particular case that usually means bursts of electric energy, the kind of noisy jazz that sets cheap neo-funksters on edge and eventually gets them running. It certainly doesn't hurt that this recording was made live at Seattle's Owl and Thistle.

Funk is all about the backbeat, in this case largely residing in the sticks of drummer John Wicks—who takes an inventive tack to avoid the drag of repetition. Depending on the setting, he steams deep into the groove, locks into a marching band snare swing, takes rim shots on an easy lope, hits polyrhythmic funk head on, or goes square and thick with heavy metal horns. It's exactly what's needed to ground this bass-less group.

As you might imagine from that laundry list of styles, the Syncopated Taint Septet does quite a bit of traveling, sampling a range of sounds with common roots. With the balance skewed toward open-ended improvisation, though, formal role-playing is kept at a minimum and brief excursions pop up everywhere. Baritone saxophonist Craig Flory handles the low end with an ear for support; trumpeter Dave Carter stretches and slides down his lines, making them slippery as sweat.

Hunks of brotherly love ("Philadelphia") and swamp bump ("Let Me Be Your Voodoo Doll") emphasize roots, but in the end the edgy sound this group cultivates pushes it into a classification all its own. The Syncopated Taint Septet launches clumps of sod skyward, and they land in the most unexpected places. Catch them if you can.

Visit Ropeadope on the web.

Freakus Piniatus; Philadelphia; Let Me Be Your Voodoo Doll; Runnin Away; Too Many Toys; Bus Barn; Christina; They Did What To You; Morphine.