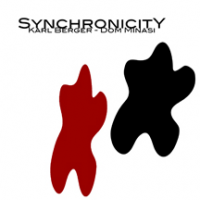 The two men responsible for Synchronicity are known as bold risk-takers, well-informed free spirits and beyond-the-norm sculptors of sound, and these potential epithets are rightly reflected in the music they make together. Vibraphonist/pianist/wearer-of-many-hats Karl Berger and guitarist Dom Minasi met approximately a decade before this project came to pass and, while they periodically discussed the idea of recording together and even had the chance to lay down a short, 37-minute program at one point, this is the first proper, full-length album of music they've recorded as a duo.

While some may be tempted to simply call this "avant-garde" and call it a day, the truth beyond the sound isn't so simple. Berger and Minasi are simpatico conversationalists and sonic builders who use tensile stress, tentative tones and tectonic rub as their building materials. Games of cat-and-mouse, hypnotic angularity and perplexed asides are sprinkled throughout the program, as both men take solo spots, converse and overlap.

A directional continuity can certainly be felt across the entire album, but it also comes across like a two-act play. The texturally even vibes-guitar duets come first and the more broad-based, piano-guitar duets follow. The album opens with both men feeling each other out and getting into a comfort zone ("Dancing On The Stars") and several early pieces deal with wavy lines and melodic crosscurrents ("Echoes" and "Waterfall"). The uptight tension of "Hurry! Hurry!" separates it from the rest of the material in the first half, but the majority of this music exists within a similar orbit. When Berger moves to piano, greater contrast and range can be felt. "She" is a treasure trove of aural gems, "Synchronicity" is marked by angular runs, "Prophesy" is forever foreboding and the album-ending "Bach?" deals with puckish and outre counterpoint that nods to its namesake, but would likely leave him scratching his head.

Synchronicity, in its definition, deals with items that are "causally unrelated," but that doesn't hold true for the way these ideas come to pass. Both men connect and react to each other, albeit in a unique way that touches on symbiosis and independence, and this relationship is the key to the success of Synchronicity.