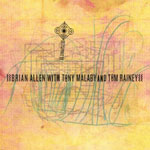 Because the eight tracks on this disc are free improvisations, Synapse officially qualifies as "difficult" music. The structure, density, dynamics and overall timbre evolve as each track plays, and as such takes a bit more closer listening, even repeated listenings, to begin to follow what these three wonderful musicians are doing.

The album has a very open sound since there is no chordal instrument, and not really even a rhythm instrument. Drummer Tom Rainey (heard this year on violinist Mark Feldman's ECM release What Exit) is a full melodic partner in the proceedings, rarely playing with an overt pulse. Tenorist Tony Malaby (who recently appeared on Samo Salamon's Two Hours) and the ostensible leader, trombonist Brian Allen, take turns supporting each other in varying registers and with different degrees of intensity as both "soloist" and "accompanist."

A synapse is the space where neurons come together and transmit a signal from one to another—in other words, where the neuronal connection happens. The album is full of suggestive connections beyond the title—including the cover art as well as the track titles, which seem to be anagrams, but which just will not be cracked.

These ideas of connection, passing information, and scrambled information waiting to be decoded provide at least some of the keys to getting into this superficially inscrutable music. It is more than just sound to which the dictum "Let it flow over you and see how it makes you feel" would apply. "Briersrok" is perhaps the most immediately accessible track: Rainey slowly brings a pulse together as Malaby and Allen intimate a thematic phrase, which can then be discerned in various guises. About halfway through, things get quiet and Rainey begins a steady, but ungrouped beat that mutates into a very cool groove, which is quite pleasant to hear after so much abstraction. When the steady pulse dies out towards the end, Allen and Malaby's individual lines, once again freed from the tyranny of the beat, take on fresh meaning.

There is a lot going on all the time throughout this record, and it is surely not background music. With many and varied techniques, played with differing amounts of flow, regularity and angularity, Synapse is a constantly changing and ultimately engaging release for those who like, even rarely, to travel on the brainy (to use an Allen anagram) side of jazz. There's a lot of music here for those willing to look.

Visit Brian Allen and Tony Malaby on the web.