By GLENN ASTARITA
March 5, 2015
Sign in to view read count 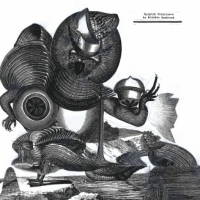 Guitarist Brandon Seabrook (Andrew Drury, Anthony Braxton) is justifiably garnering considerable press as a burgeoning firebrand who terrorizes or perhaps, atomizes the banjo and guitar with punk metal, free jazz and anarchistic rock proclivities. With his third solo release he conjures otherworldly and brain-bending propositions via an array of highly disciplined supercharged performances on banjo and guitar. He's also a frequent collaborator on the jazz improvisational front amid first-call session duties for new wave jazz productions that our largely outside-the-box.

Seabrook springs his imagination into warp speed with these amazingly fast workouts on tenor banjo and electric guitar. Yet his hyper-mode and strenuously enacted chord clusters also induce a crazed view of Americana. The guitarist's rifling and briskly cycled notes are occasionally treated with some degree of phased or background effects along with electronic drums programmer, Dr. Vitalizer's reverberating progressions, sweeping rolls and fastidiousness accents.

This swiftly paced album clocks in at LP length, which is fine because mere mortals may not be able to withstand 70-minutes of earth shattering genre-bending. On "Selfodomized Poltergeists," Seabrook's blazing rhythmic configurations and Vitalizer's rumbling patterns spawn extreme turbulence from a controlled chaos perspective as they seemingly communicate with a bunch of irritated phantoms. Moreover, his high-velocity, multilayered phrasings on "Mucoidal Woolgathering" signal an avant-garde spin on bluegrass with rotating mini-motifs and cyclical upper-register voicings atop Vitalizer's timestamp framed beats. Thus, Seabrook's weirdly appealing supersonic soundscapes may establish an alternative paradigm for guitarists, as he zigzags across musical galaxies with the greatest of ease throughout this wildly unique, mind-tripping jaunt.