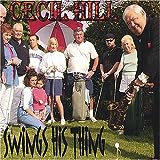 Back in the heyday of the big band, critics, reviewers, jazz journalists, etc., spent a lot of time, mostly unnecessarily, categorizing most bands into two groups: smooth sounding aggregations, and the killer diller outfits who blew the roof off the house every time they took the floor. Of course, I'm talking about those bands (and this means most of them) which never quite made it to the to the level of Miller, Barnet, James, Ellington, Dorsey, Basie and those others who made it to the big band pinnacle, but based on their unique arrangements and top flight soloists. Hill pretty much falls into that smooth category of music, of a kind that certainly will appeal to slow dancers. In addition, there are guest appearances by artists who spent more than just a considerable time as first chair players in the top bands of their time. This includes Conte Candoli and Med Flory. It's Hill's alto which gives the group their smooth sound such as on "When You Wish upon a Star". In addition, like most of those groups who plowed the circuit trying to make a go at this jazz genre, there are some good, if off the wall, vocal solos. In Hill's case it is "Little Egypt", which features Pete Christlieb on tenor.

All in all, a pleasant 45 minutes of Lawrence Welk like music which won't hurt anyone and please many.

Serenade in Blue; One O'Clock Jump; Town Without Pity; Two of a Kind; Sabor a Mi; Flat Foot Floogie; When You Wish upon a Star; Blue Monday; Since I Fell for You; Night Train; Little Egypt; So Rare