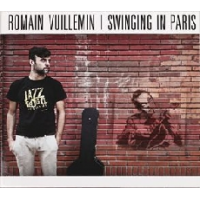 Anyone who needs a lift from current state of the world could do much worse than popping Swinging In Paris into the player and be transported back to the late 1930s and Django Reinhardt's Quintette du Hot Club de France.

Guitarist Romain Vuillemin's quartet (guitarist Stephan Nguyen, violinist Guillaume Singer and bassist Jeremie Arranger) was created to, in his own words, "pay tribute to Django Reinhardt in his purest style, interpreted with a pinch of originality in the musical arrangement. A project which sources its inspiration directly from Django rather than just gipsy jazz in general, following the unique and less commonly known Fapy Lafertin's legacy."

Lafertin is a Belgian jazz guitarist of Romani ethnicity who is a smoking player from his head to his toes, with Vuillemin and company matching his intensity and musicality.

While the style places this music in a particular place and time, good music transcends its origins or inspirations. Those who are familiar with Django Reinhardt and Stéphane Grappelli will not find any slavish copying here, but rather something that makes this album irresistible: the core of the Django style has been thoroughly internalized by Vuillemin and company so that they are free to be themselves within this chosen framework.

For those who known the name "Django," but are not familiar with his music, Swinging In Paris is a wonderful introduction to his musical world. The tracks are nicely paced, running between the driving freight train rhythms and lightning runs of "Swing 41" or "The World Is Waiting For The Sunrise" to softly swinging "Body And Soul" or the wonderful triple-time "Parlez Moi D'Amour," which was featured in movie Sweet And Lowdown.

And who knows, maybe Emmet Ray (the second greatest guitarist in the world), who always fainted when he heard Django, would do the same when he heard the deep, swinging sounds of Swinging In Paris!.

Swing 41; Songe D'Automne; Parlez Moi D'Amour; Three Little Words; The World Is Waiting For The Sunrise; Tea For Two; Joseph, Joseph; Choti; I Love You; Topsy; Body And Soul; Exactly Like You; Renouveau.