By HRAYR ATTARIAN
December 14, 2012
Sign in to view read count 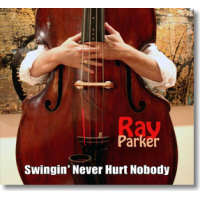 Legendary guitarist Django Reinhardt's legacy comes alive on Ray Parker's debut, Swingin' Never Hurt Nobody. A veritable double bass virtuoso, the freelancing Parker is much sought after as a bandleader and side musician in a variety of settings. This delightful foray into the musical world of string-jazz allows him to demonstrate his immense talents as an improviser and instrumentalist.

His intricately built arco solo on "Guitar Sammich—Now's The Time" has a lilting cello quality in its tone and an innovative harmonic restructuring. This, and his uniquely dark, plucking, make the tune simultaneously nostalgically retro and excitingly fresh.

Joining him on this date are violinist Russell George and guitarist John Hart—regular Parker collaborators both, and whose close camaraderie is on clear display. The old workhorse "My Heart Belongs to Daddy" gets a youthful glow as George and Parker reverse traditional roles. Parker mellifluously bows while George deftly plays the melody pizzicato and with tzigane flair. Hart's yearning guitar adds romance to the passion expressed by his band mates.

George handles his violin with adroitness reminiscent of Stephane Grappelli, his warm and complex improvisation on "Too Close For Comfort" paralleling Parker and Hart's clean, bebop style. George glides smoothly over the ragged rhythms on "The Best Things In Life Are Free," peppering it with brief quotes from a variety of standard, while Hart adds a hefty dose of the blues with his simmering strings.

Known for his audacious and captivating sound, Hart sets a crepuscular mood with his sparkling and dark rhythms on the balladic "Zingaro," filling its ambience with an eloquent and lovelorn air.

Parker and his trio have released an enchanting work of innovative and accessible music. It echoes in the mind long after the disc has stopped spinning. Hopefully a sophomore effort will soon follow.

Guitar Sammich/ Now's The Time; The Best Things In Life Are Free; My Heart Belongs To Daddy; Always; The Nearness Of You; Too Close For Comfort; Zingaro; Just In Time; Goodbye.