Broken Things: Swim To The River 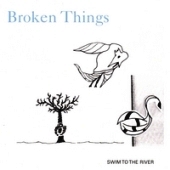 Whether your daily travels consist of trails through a sprawling metropolis or remote terrains, Swim To The River has the spirit of being on the "open range, with elements of rural and earthy soundscapes. These trails however, are denoted not only with the feel of the outback, but also folk, rock, free jazz, and accessible melodies performed by the Chicago-based group Broken Things.

Led by guitarist Bill MacKay, the group formerly known as Sounds of Now (Self Produced, 2005) continues to evolve. Whiles things seem more focused and lyrical there's also more of what keeps them interesting: the ability to not sound like a jazz group as they cultivate their own music. Seemingly drawing inspiration from influences ranging from pianist Alice Coltrane to rockers Led Zeppelin, they succeed in avoiding being defined by any particular genre.

There are good harmonies from the two front voices of MacKay and saxophonist Greg Ward, and taut support from drummer Tim Daisy and bassists Jason Ajemian and Todd Hill, who split bass duties on the six tracks. "Doll Mountain Rag has a familiar Midwestern flair, while the "Broken Things slowly emerges, informed of both roots and rock music as MacKay delivers a nice chorded solo.

From south of the border comes the "1919 Molasses Tragedy, an interesting tune with good interaction and rich instrument timbres. Next is a favorite called "Water's Edge, containing a darker theme, free solos, and an ending that literally slays—with an Ozzy Osborn/Metallica head-banging riff and Ward delivering another hot solo.

"Keep A Secret is an upbeat piece that takes off and soars, while "The Reservoir sinks to the bottom, then gets down and dirty with a nice blues groove. The road to success for many musicians is paved with good intentions (and not enough originality) and it's cool that Bill MacKay and Broken Things are following their own path.