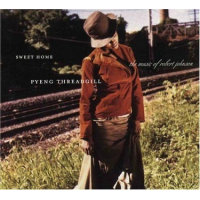 About halfway through the nine-minute "Come on in My Kitchen," the listener will realize that Pyeng Threadgill's hommage to Robert Johnson, Sweet Home, is not simply a Cassandra Wilson knock off. In fact, it should come as quite an epiphany that this recording is something very rare and special. Johnson's tome of longing is transformed, in turn, from a '40s girls' ensemble piece into a funeral dirge dominated by Threadgill's elastic voice, Kevin Louis' trumpet and the mourning piano of Dave Pier. That is followed by a trombone-trumpet-voice Monteverdi polyphonic madrigal that flows into a New Orleans gumbo gospel vamp, spearheaded by the trombone and then the full band, replete with muted trumpet. After that, the closer, "Ramblin? on my Mind," sounds almost down right pedestrian until one realizes that this is the most typical blues form on the record and that is really saying something.

Pyeng Threadgill is the daughter of saxophonist Henry Threadgill, long associated with the Chicago avant-garde scene. His beautiful and creative spawn has made a record of such fearless daring and crystalline invention that this may be the most effective tribute to the Phantom yet digitally applied. In these 70 minutes, Miss Threadgill and her able band deconstruct and reconstruct the heart of the Johnson canon. Instant kudos to her for covering "Phonograph Blues;" even with its shaky gender center, the song remains one of the greatest double entendres committed to record. "Dead Shrimp" contains what one would thinks is a perfect Latin vamp, but sounds more other-worldly with each listen.

It is a bit too early to tell, but this very well may be the best recording of 2004 to come my way.

Visit Pyeng Threadgill and Random Chance Records on the web.

Love In Vain; Phonograph Blues; Last Fair Deal Gone Down; Milkcow Calf's Blues; When You Got A Good Friend; I Believe I'll Dust By Broom; Dead Shrimp; They're Red Hot; Sweet Home Chicago; Come On In My Kitchen; Ramblin' On My Mind.