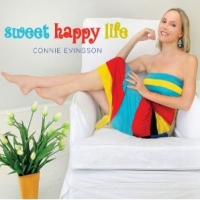 The unifying subject of Sweet Happy Life is Grammy and Academy Award-winning lyricist Norman Gimbel, most notably the wordsmith on songs like "The Girl From Ipanema," "Sway," "Canadian Sunset" and "Killing Me Softly With His Song," all of which appear here, eloquently interpreted by Evingson and her fine band. The majority of the songs are bossa nova in color, as Gimble was a collaborator with Antonio Carlos Jobim, Pablo Beltran Ruiz and Carlos Lyra—one of those musicians whose wares are immediately recognizable, but who has always been hard to identify because he comes from all stylistic and media directions. Evingson's homage serves to shine as much a light on Gimbel's talent has her own.

Evingson proves to be a most honest bossa nova interpreter; that is, the genre is not perfectly her cup of tea, but her accomplished musicianship is able to take all of these songs and truly make them her own. Evingson's "The Girl From Ipanema" is certainly not pianist/vocalist Diana Krall's, nor does it try to be. Instead, Evingson's performance is breathtakingly real and in character with her past recordings. "Sway" is wonderful, sporting some tasty saxophone from Dave Karr; Evingson's grasp on Brazilian music is clearly close and personal, and she treats it as such.

Being able to listen to "Killing Me Softly With His Song," "Canadian Sunset" and "Bluesette," programmed so closely together, accentuates the humid nature of Caribbean and Brazilian influence in Gimbel's music. It is Evingson's close attention to this which propels the disc to greatness. At a time when everyone believes they can sing bossa nova and releases a disc to prove it, Connie Evingson takes the bossa bull by the horns and has produced a true masterpiece.

Agua de Beber; Meditation; Slow Hot Wind; Sweet Happy Life; Killing Me Softly With His Song; Canadian Sunset; Watch What Happens; The Girl From Ipanema; Sway; Bluesette; How Insensitive; Take Me To Aruanda; So Nice; Adventure; I Will Wait For You; Tristeza.