By DOUGLAS PAYNE
October 1, 1998
Sign in to view read count 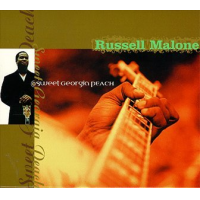 Sweet Georgia Peach is one of 1998's most compelling mainstream jazz releases. Guitarist Russell Malone (b. 1963), known better for his sideman roles with Jimmy Smith, Harry Connick, Brandford Marsalis, Diana Krall and Mose Allison, has produced quite a fine jazz document here, in only his third effort as a leader.

He's a musician of many gifts, who never seems consciously influenced by any particular guitarist or even a direct musical style. Indirectly, he can suggest the moodswings of Larry Coryell. But such a declaration subjugates the quality of Malone's individual conceptions.

Here, Malone is captured in an all-star quartet featuring pianist Kenny Barron, bassist Ron Carter and drummer Lewis Nash. For a studio ensemble, this one is a tight unit that works quite well together. The bulk of the music consists of Malone's originals. He's a fine, notable composer with a gift for burying the implicit technique of his ideas under the genuine appeal of his melodies.

Check out the intriguing mid-tempo "To Benny Golson," the Larry Coryell like "Mugshot" (with an exceptionally spirited solo from Barron) and the funky "Freedom Jazz Dance" groove of the intricately-paced title track (with another great feature for Barron). The waltz he wrote for his son, "Song for Darius," offers another memorable melody and yet another expert showcase for Barron's piano artistry.

Malone's playing stands out especially on the covers he performs, most especially on the evocative "Someone's Rocking My Dreamboat" and the wonderful piano-guitar duo of Monk's "Bright Mississippi." What's most surprising, though, is how Malone rethinks two late 1970s hits. Hear how he stretches Herb Alpert's disco trash, "Rise," into a compelling mid-tempo ballad. Then listen to his sincere reconsideration of the Billy Preston/Syreeta hit "With You I'm Born Again" (to my knowledge, the only other jazz cover of this was Eric Gale's in 1980). "Born Again" is preceded by Malone's "Strange Little Smile" a terrific lullaby, like his solo rendition of "Swing Low, Sweet Chariot" that suggests Malone has developed quite a niche specialty.