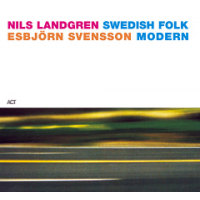 Contrary to Wynton Marsalis and Stanley Crouch, jazz is no longer an American or, even more specifically, Afro-American art form. Jazz has, in fact, always been about incorporating music from various traditions, folk and otherwise, into something of a cultural melting pot. While American musicians including John Coltrane, Louis Armstrong and Miles Davis looked to African music and, more close-to-home, blues as sources to be developed and evolved, so do artists from other parts of the world, including Jan Garbarek and Anouar Brahem, look to their own traditional music for inspiration. Now ACT has chosen to reissue the 1998 recording Swedish Folk Modern by Swedish trombonist Nils Landgren and pianist Esbjorn Svensson, which makes a case for the incorporation of not only music from their country, but from other traditions as well.

The program is mostly original material, co-written by the duo; while it demonstrates a rich diversity of sources, the influence of Swedish music is clearly the dominant force; from the childlike naivety of “Hymn: Morgon Mellan Fjellan” to the modern impressionism of Alfven’s “Midsommarvaka from Swedish Rhapsody No. 1.”

Svensson is the more well-known of the two, but he reveals a different side to his playing by stepping away from the jazz-meets-pop sensibility of his E.S.T. group. Stripped of the comfort zone of a rhythm section, Svensson demonstrates that he is a strong accompanist; spare and poignant on “Visa fran Leksand,” or down-and-funky on “Gardebylaten.”

Landgren has yet to reach the same kind of international stature, but through a diversity of recordings from funk to big band he has demonstrated solid abilities as a performer, composer and arranger. Like Yves Robert and Gianluca Petrella he makes a strong case for the trombone as in instrument of emotive depth. With a tone that is lush and never brash, he can be tender on “Vaggvisa,” or boisterous on “Lapp-Nils Polska,” where he marries blue bebop lines with a lapsed polka sensibility. For this reissue ACT has also included a bonus live version of the latter track, which gives both players a chance to stretch out and build things to a fever pitch; a bit of an achievement for such a spare instrumental duo.

The liner notes purport jazz as “the musical language that fulfills the vision of a modern society of people getting together to create, work and communicate by searching for one common goal: freedom of the individual with a group of equals.” The time has truly passed for people to associate jazz with any one ethnic musical root; it is truly a world music that subsumes a rich tapestry of influences into a larger whole. Swedish Folk Modern is as strong an argument as any to support that belief.

Visit ACT Music on the web.