By MARK SABBATINI
July 5, 2004
Sign in to view read count 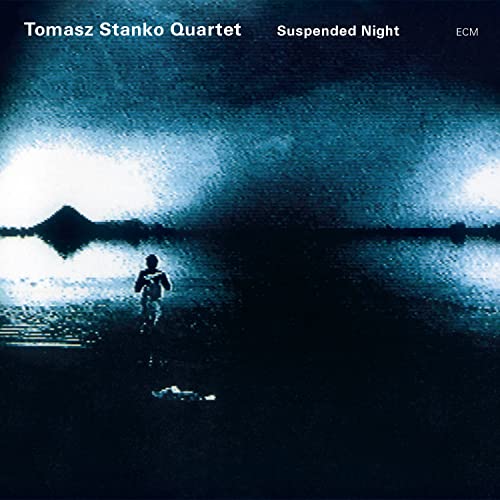 Now this is what a ballad album is all about.

Polish trumpeter Tomasz Stanko turns in one of the finest efforts of his four-decade career with Suspended Night, an album that can only be described as haunting and gorgeous. It is one of those rare discs able to reach any level of listener, from casual types who will find his seductive tone ideal background fodder to purists able to appreciate a stunning depth that all but demands multiple playbacks.

Stanko, 61, built his reputation as a free jazz and avant-garde player, and he works those elements here with deceptive and devastating effectiveness. The textures of most of the songs are so smooth and sparse the casual listener may never realize how Stanko is exploiting the space provided. He also does so in a way that even those normally put off by the chaos of free jazz are more apt to see his acoustic brushstrokes as rich and colorful elements of a master painting rather than random splatters of paint on canvas.

The quartet, featuring a group of fellow Polish musicians Stanko started working with a decade ago, start with the lush ballad “Song For Sarah” before proceeding to the ten “Suspended Variations” making up the remainder of the album. What’s beautiful is how it never feels like anyone is taking the simple approach even in their rhythm backings, which is where the subtle but crucial difference between listening to this album and hearing it comes into play.

Things never really get up-tempo on any of the pieces, but some frenetic work fills the minimalist outline of certain songs. “Suspended Variations V,” for example, has little structure beyond Slawomie’s double bass line, while the other three feed off each other in a wide-open, free-blowing session. But the final result is more order than chaos, revealing how cohesive the quartet is after all these years. At only four-and-a-half minutes long, it’s a great introduction to the concept of free jazz for someone unable to grasp the more marathon avant-garde indulgences out there.

Suspended Night is not another Kind Of Blue, despite some marketing hype suggesting otherwise. It is, however, the sort of disc that ought to be required giving to everyone filling their CD changers with material from the Kenny G school of jazz—it’s inspiring how Stanko’s free-range playing can be as well-suited for dinner parties as the G man’s chord-tone “solos,” and with any luck maybe someone will wake up and realize what’s really going on.