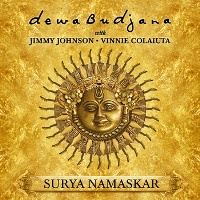 For his seventh solo release, Indonesian guitar master Dewa Budjana garners support from the all-universe rhythm section of Vinnie Colaiuta (drums) and Jimmy Johnson (bass). Many of these works equate to a concentrated focus on song-forms, largely comprised of tuneful themes and elevated with a guts and determination modus operandi. Budjana presents the best of both worlds within a jazz rock and jazz fusion realm, where rich melodies and a dynamic slant offer a platform that resonates loud and clear.

The band's assertive attack rules the roost, other than a few ballads where Budjana displays a soft touch via harmonious balladry atop pulsating rock grooves. When soloing, his climactic buildups are frequently culminated with a torrid aerial assault, tinted with various distortion techniques and sustain mechanisms. Hence, the guitarist doesn't let us keep our guards down, even during many of the softer, textual motifs. Then again, Budjana generates an authoritative command and control persona as the rhythm section generally kicks matters into tenth gear on the stormier opuses. For example, on "Capistrano Road," his soul-searching lines are contrasted with seething upsurges. Elsewhere, Budjana's blistering legato phraseology would seemingly raise anyone's blood pressure.

"Kalinga" is a glaring specimen of Budjana's astute composing skills as he broadcasts his Indonesian roots with tangy notes and fuzz-toned treatments. It's an enchanting piece, brimming with pummeling rock beats, airy thematic forays, and his complex unison lines with Johnson. Thus, a mystical encounter that proposes a beauty and the beast mindset, given the lush storyline, merged with ferocious performances. Other comps are engineered upon somber acoustic-electric choruses, and soundscapes designed with the guitarist's flickering jazz runs and of course, Colaiuta's polyrhythmic flurries and punchy backbeats. In sum, Budjana bridges the gap between hardcore shredding and a meticulous compositional pen. Indeed, a welcome digression from the archetypal fuzoid cutting contests.