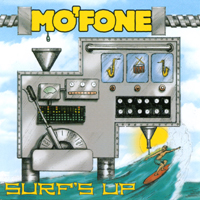 Picking over my review of my first encounter with Mo'Fone way back in 2002, I come across this bone-grating comparison: "I mistook one piece as a cover of 'Pick Up the Pieces' without all that Average White Band aftertaste." I'm compelled to apologize to Mo'Fone for this mistake because, in hindsight, I see it's so patronizing. Last year's release of Surf's Up proves this jazz trio is a powerhouse to be reckoned with. These ten tracks are fresh and relevant and outrageously great.

As noted previously, the most conspicuous features of this band are its exclusions. Although lacking a pianist and a bassist, Mo'Fone's high-octane funk-drenched sound challenges the listener at every step; this is not a CD to fall asleep to.

The group's theme song, a cover of John Scofield's "Kool," offers some particulars as explanation. After an exchange of soft brass, the trio announces the rhythmic bridge in unison followed by an introduction of the melody. Larry De La Cruz works the upper registers on the alto sax while Jim Peterson blows a staccato bass line with a baritone sax; he's so succinct that a bassist would only be redundant. Jeremy Steinkoler keeps everything flowing smoothly with solid trap work. The brass is brassy, the percussion crisp, and the exchange of solos that follows maintains constant interest.

With such a small group, it's expected that the funky groove of "Kool" would be lost when one member goes off to solo, but everyone stays inside supporting the soloist with unobtrusive call-and-responses. Steinkoler demonstrates the most restrained drum solo in recent memory by simply playing through while the other two take a brief breather. It's muscular music with a sense of humor and some wit.

While most tracks off Surf's Up echo the boisterous energy of "Kool," Mo'Fone reveals a more serious side in David Murray's "Flowers for Albert" and "Mera Dil Yeh Pukare/Man Dole Mera," the latter a cover from the soundtrack of a Bengali film. The group achieves an Eastern sound by droning the horns while Steinkoler subtly slaps the drums with his hands to mimic a tabla. Danny Bittker is brought in for additional sax work on these two tracks and he slides in without a hitch. This material also indicates the wide spectrum the group draws upon for inspiration and direction. It's not surprising to see Billy Cobham and Joe Zawinul covered here, but Mo'Fone's arrangements are never slavish to an original.

Surf's Up stands as an impressive debut as well as a significant demonstration of jazz's (and fusion's) possibilities. Finally, a cerebral band with guts enough to take big risks. If Mo'Fone doesn't blow your socks off, you're not paying attention.