By GLENN ASTARITA
November 21, 2017
Sign in to view read count 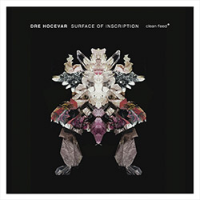 Drummer, composer Dre Hocevar is a deft improviser who largely produces music that casts his out-of-the-box thinking. With his sextet, including vocalist Charmaine Lee's avant-garde wordless chants, iterations, and conventional singing, we hear a consortium of bizarre sound designs, tonal disparities and radical spins on just about everything imaginable. It's all executed with asymmetrical cadences along with some cosmic interference supplied by electronics ace Bernardo Barros.

These fifteen pieces often appear as snapshots of a continual saga. The band occasionally works within minimalistic trajectories via a multitude of dips and spikes and call / response mechanisms. Think of fractured aural vistas that vividly express the leader's ideas, enhanced by the pristine audio characteristics.

Many of Hocevar's compositions are titled as phrases, perhaps alluding to snippets of creative foundations, targeted for expansion. On "Target Domain of Infinity [part 2]," Weston Olencki's gruff trumpet clusters and the drummer's cymbals shadings are treated with subtle EFX, leading to the following track "X Nets, Arrays, Containers," which is framed on the musicians' spontaneous interactions teetering between quietude and climactic occurrences. Here, Lee's off-centered vocal iterations serve as an additional instrument. Other works feature a mélange of dissonant applications and reedman, Michael Foster's creaky and popping notes amid Hocevar's musical drumming and the band's use of space.

About mid-way through the program, Hocevar's off-centered expressionism, awash with subtle nooks and crannies along with intermittent variances in pitch started wearing a bit thin due to the repetitious formulas and strategies in relation to the jaggedly moving parts. Indeed, he's a nascent improvisational warrior with a bright future, notably evidenced on his previous dates as a leader while falling a bit short here.