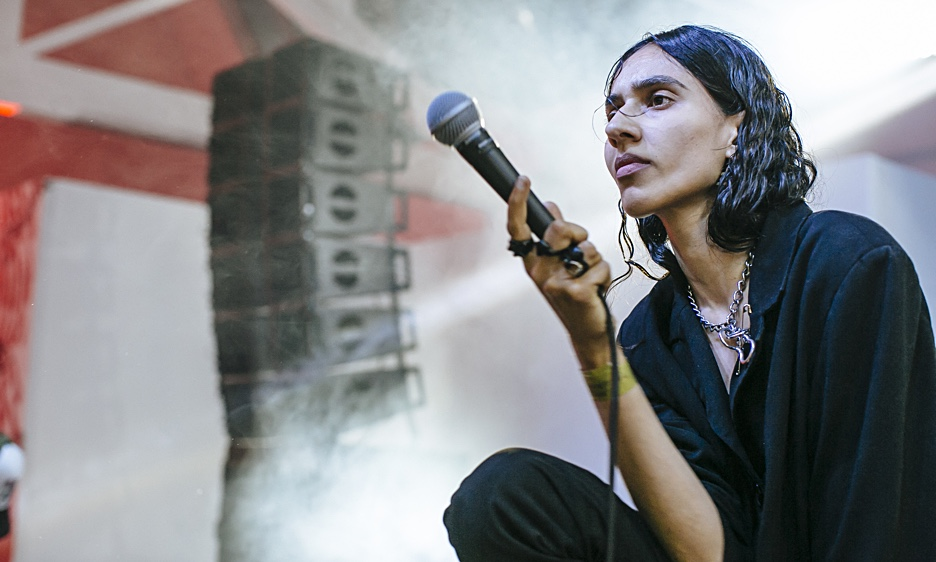 Running since 2003, the Supersonic festival specialises in musics that press firmly against the limits of cranial perception, whether expanding from deep inside our inner liquids, or fracturing in unexpectedly like a bolt of intrusive alien contaminate. Supersonic sounds can be minimalist and meditational, but most often they are pulsating, scything, crashing or splintering, prompting headbangs or butt-shuffles, according to ratios of guitars and electronic basslines, subsonic or shrieked vocal expressions, suffocating drudge-weight or sprightly cosmic feathering.

Compared to previous episodes, this one was more exploratory, less populated by known names. Back in 2014, your scribe's last visit, there were Matmos and Swans topping the bill, but in 2018, Gazelle Twin was the biggest name, flanked by Wolves In The Throne Room, Shirley Collins and The Ex. Maybe this was a budgetary consideration, like so much in our austere lives, but this ultimately did not matter, as the weekender was glutted with excellent performances, regardless of ticket-selling 'stature.' Plus, over the three days, the multiple rooms always appeared suitably filled with punters.

The heart of Supersonic throbs, as ever, around the Digbeth (former) industrial zone, chiefly hopping between a City College outcrop and the festival's ancestral home of The Custard Factory. Multiple stages existed, though there were, let's say, three spaces where most of the mainline programme unwound.

Fierce women made their mark on the opening Friday, but there were a few older gents to top off the night with their serrated, jolty rockaboogie. A remarkable discovery was Wetware, apparently from New York City, although this duo's profile there is not so high. The concept is an old one (see Suicide): as wall-of-scuzz electronicist Matthew Morandi piled up gouged scurf, whilst the extraordinary uninhibited singer/orator/screamer/slammer/ranter Roxy Farman hectored the gathered crowd, spending most of her time circulating the floorspace in front of the stage, easily clearing a runway, as she careened into bodies, or squatted foetally, amassing a compelling territorial intensity, and appearing genuinely on the brink of dismissing control. This was a powerful performance, even if the actual electronic matter could have been even louder. There are not many acts at Supersonic that prompt shouts of 'louder!' or 'turn it up!,' but perhaps Wetware could have found a bigger 11 on their dial.

Soon following, Moor Mother, also known as Camae Ayewa, being a member of Irreversible Entanglements, offered a similar declamatory vocal prowess, set against a barrage of sliced'n'diced collage samples. This Philadelphian orator held a more static position, vocalising in extremity, actual words rarely decipherable, unless we'd already heard her recordings. Ayewa's accumulation lay not only within her own set, but as a continuation of approaches set in motion by Wetware. Violently textured protest song, although these ditties would be difficult to cover in a Greenwich Village folk club.

The end-of-Friday peak arrived from a guitar-rockin' Dutch direction, though. The Ex approach from a skittish, angular, fragmented trajectory, even if their drummer Katherina Bornefeld provides a light-triggered, jagged funk danceability. The three guitarists, led by 1979 founder member Terrie Ex, frequently coalesced into a buzzing, riffing, flame-on mesh of ecstasy. Unsurprisingly, the band's attuned to regular collaborations in the worlds of free jazz and Ethiopian groove, though this particular set illustrated their core punk proficiency, mostly keeping to a savage guitar-careening course, repeatedly using dense strum-strafe riffing to reach multiple climaxes-and-releases, scattered with abstract string-freedoms.

Saturday began earlier, in the afternoon, with sunlight-streaming into the Custard Factory space, and quieter musical manifestations wisely opening a long stretch of sets. Joasihno specialise in mechanical additions that set instruments playing, lightly touched by delicate machinery, like tinkered clock insides, but spread across the floorspace, given different tasks, and thereby making up a musical pile-rug, homely and home-made in nature, metro- gnomic and techno-organic.

Dwarfs Of East Agouza combined Arabic music with corroded rock textures, pulsing and ruptured, representing Cairo's alternative roots-mangling scene, which may well be an underground, winding alleyway happening. The Bosnian accordion player Mario Batkovic is lately living in Switzerland, and his solo set was a festival highlight, pulling in to a simple core of solo performance. Except that, used like a micro-orchestra, his instrument was swollen into grandiose expression, negotiating typical Balkan sounds, but making forays down the twisted avant gypsy road. Batkovic was also the most humorous performer of the weekend, littering his set with absurd observations and helpful commentary.

Just outside Stage 1, the Syrian-born Khyam Allami lay in wait, already into his Maqam Rast Remodel of Terry Riley's seminal "In C" work from 1964. We're used to hearing readings of this template piece given by outfits that spring from improvised jazz or alternative rock backgrounds, and certainly by moderne classical players, but this was something else again, a scintillating, spangly, electro-Arabic layering that followed Riley's central principles, but still sounded like a very different manifestation. It was so captivating that your scribe became an alternative minority, self-chained to a small cluster of tables-and-chairs, eschewing the more populist rock acts available in action during that same time-phase.

If you ever, ever, descend into the forbidden bowels of a karaoke session, then let it be one devoted to the ditties of Black Sabbath. Your scribe has always violently avoided the 'karaoke' event, but due to a strange void in the Supersonic Saturday nite programme (possibly as a result of his own subjective tastes), he found himself enticed into the world of "Paranoid," "War Pigs" and surely the anthem of Birmingham, "Iron Man." But, he failed to sing like Ozzy, and headed straight into the headline set of Gazelle Twin, another powerful female presence at this festival, but with her energy directed into a twitchy, inward zone of English electro-eccentricity. She likes to hide (or express herself) within strange garbs, and the latest is a masterful combination of morris dancer, hip-hopper, jester and equine jockey chic, complete with stalker head-stocking, and useful mouth-hole. Plus, she (Elizabeth Bernholz, Brighton, England) has a body language of graceful twitches, mannequin poses and implied dance moves. This set was where she unwrapped the contents of new album Pastoral, vocals filtered, bearing the most extreme use of ye olde recorders in modern music, perverting Medieval palettes into glitched, cantering abstraction. The addictive "Hobby Horse" was an almost instant 'pop-pick,' but your scribe could understand why its snagging repetitions might annoy some folks. This song arrived at the end of a set that was flexed with high control, and full of nervous musical alterations, always with some new circus-weird quirk leaping in from the wings.

Once more, the afternoon started with sun-motes and sensitivity, as Sunday brought banjo-totin' Baltimore troubadour Daniel Higgs along, to weave tales, both spoken and sung, poems intoned or lines warbled, hands, arms and face also expressive in stories. His words had depth enough to prompt puzzlement and individual interpretation, sounding like ancient wizardly texts.

Charles Hayward played drums with one of the greatest British bands ever, the mighty This Heat, and has continued to astound with This Is Not This Heat. At Supersonic, he gave a solo display that kept to a pretty basic, minimal vocabulary, and didn't really develop in the many captivating directions which might have been expected. Nevertheless, it was still pleasing to catch him in action, in this unusual specialist state.

Also solo, performing inside the tiny Ideas Of Noise wooden shed, Paul Dunmall decided to concentrate solely on his set of bagpipes, possibly because his saxophone collection wouldn't fit in this very confined space. All weekend, IOS, which was soon set to debut as a festival weekend itself, had presented a variety of improvisers and sonic enquirers, Dunmall being the most well-known on the scene. Many folks might run for the hills when presented with the opportunity of a bagpipe improvisation set, but Dunmall has a fine control of his sac's high frequencies, perhaps setting the teeth into a grind, but creating a tense excitement as he led the select shed gathering towards a refined plane of sharply directed high-bleat constructions.

The Sunday concluded with a maximum contrast between the studied intimacy of English folk pioneer grandmother Shirley Collins, followed by Washington-state biker heavies Wolves In The Throne Room, but the real deal came a touch earlier in the evening, courtesy of Gnod, with their tightly-honed prog-post rock explosiveness, Herculean riffage delivered in a complicated, shuddering confrontation of fracturing edifices, cerebrally uninhibited, as menacing Salford control freaks came undone.