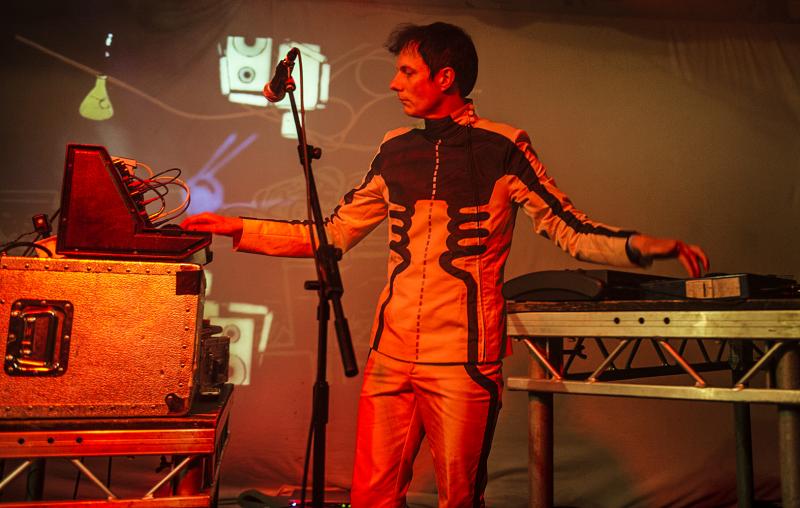 Supersonic is dedicated to the aural extremes of electronica and guitar music, perhaps gradually tipping its balance towards the latter during the festival's decade of existence. This year's manifestation took place around five months earlier than its customary time, and was a 'limited edition,' deliberately harking back to its more contained roots in the Custard Factory cultural encampment, where the fest began. Even though numbers might have been curtailed, Supersonic still had a substantial gathering of punters, not too overcrowded but still dense enough to whip up a heated atmosphere. Yes, Supersonic was sensibly sold out! It was also sensibly on time, given that most of the action was on two stages, in alternating fashion. The sound quality too, was sensibly sculpted, for maximum clarity, particularly when the electronics hit their low- and high-end optimums. With all that organizational sensible-ness taken care of, the platform was clear for the controlled chaos of the music, the sculpted anarchy that stands as the majority approach. If acts are making a hellish din, it helps if their loving attention to sonic distress is captured with all its warty textures intact, laid out for targeted cranial bombardment.

Birmingham promoters Capsule run a gig program all year long, but their refined curating abilities always reach their peak for Supersonic, where time is allowed for contrasts and combinations, a mulling of the aural swill. The Friday evening began with Anta, a new-ish five-piece from Bristol. Much of their language was in the metal tongue, but the presence of a keyboardist gave them a slightly disconcerting taste of prog rockery, even if their angular riff structures were gilded with more than the expected amount of pustulous clumps. After this rock'n'roll burst, the rest of the night slunk down the electronic alleyway. Jarringly, the Matmos duo from Baltimore (together for nigh on two decades) sported radically contrasting wardrobes, with M.C. Schmidt garbed in smart business suit and Drew Daniel adopting studded biker chic. Their set seemed short, but that was probably just because it sped by, filled with diverse tactics, extended pieces that boasted completely different orientations. Narrative content spilled towards a beat-driven juggernaut, looking and sounding as though it was assembled on the hoof, using a simple metronome as a starting point, with beats loaded up, no excess spared. The pair's hi-tech video gear had died, so they resorted to using a laptop camera to view the ticking 'nome.

As the bass weight steadily became monumental, Matmos proved itself the sweetest hi-fi experience of the weekend, brutally amplified, every minute detail limned for crisp bombast. The rafters of this converted factory space began to snow tiny flakes of peeled paint, quivered off by bass-wobble, and the metronome began to vibrate across the table, trying to escape the camera. This was the only gig in the history of the globe where a roadie was seen sticking gaffa tape onto a metronome to arrest its escape progress. Schmidt proved himself to be a sharp-witted, humourous host in between each piece. Next up came a Tibetan flavored piece, full of captured flute-breath and arcane hand gestures, but not before the guest-starring Jeff Carey played a set-within-a-set, standing at his micro-table console, leaning it towards the audience as he triggered his rubber gaming stick, looking to be on the brink of falling into the crowd, as he coaxed coarse electro-eruptions for his interlude. Matmos had already been made early contenders for position of triumphant combo of the weekend.

Very soon afterwards, the electronic wonderment continued with Felix Kubin's solo performance. This German keyboardist comes from the Kraftwerk school of deadpan roboticism, artfully poised between 1980s pop-kitsch and a genuinely spiky experimentation. We weren't sure whether to be stern twitchers or to smile helplessly, as he cut shapes in his striking zip-up suit, emboldened by its sweeping graphic curlicues. He switched between a vintage Korg MS-20 and a more conventional keyboard, partnering dinky retro trills with darkly brutal basslines of a more modernistic nature, almost combining dubstep with electro-pop. He played his ace-in-the-howl by brandishing a pair of cut-out lightning bolts at the climax of his dazzling set, striking further windswept poses as the synthi-anthem throbbed.

The second day was fuller, starting at 4pm rather than 9pm, and pouncing straight into the peaks at an early stage of the evening. New York singer/guitarist Chris Brokaw (of Codeine and Come fame) opened up with a suitably intimate recital, sometimes delivering songs, but also including a swathe of instrumental film music, cleverly utilizing moderate amounts of distortion to combine melody and abrasion. His vocals weren't the most tuneful song-channelling tool, but the numbers are best heard as storylines, narrated without much voice dynamism. It's the guitar that provided the true expressive core of the pieces.

Agathe Max, from Lyon, played a solo violin set, although her heavily effected sound wouldn't have existed if not for the pioneering work of John Cale and Tony Conrad. She plastered slow-drawled looping-lines, making a dragging construction that moved forward at an appealingly lumbering pace, allowing the audience to savor her thick, granular textures. Daylight was still beaming through the skylights, all the better to impart that special loft studio aura to the proceedings.

Then, one of the weekend's mightiest acts stormed the stage, early evening light still dappling, even though their crazed sounds were meant for the midnight hour. Alien Whale brings together the tri-borough (Manhattan, Brooklyn, Queens) New Yorkers Colin Langenus (guitar), Matt Mottel (keytar), and Nick Lesley (drums), three musical maniacs with a desperate rapport, once again taking a form, psychedelic jazz-rock, and bending it into an extreme parody—thrilling, absurd, macho and moronic, virtuosic and violent. Mottel and Langenus were vying for supremacy as they traded ever more elaborate solos, kept aloft and limber by Lesley's whipcrack patterns. When Langenus was rising up to solo dominance, Mottel maintained a rippling bass flow, but when the keytar-slinger came forth himself, the treble end suddenly ripped into glorious primacy, in a rocked up Terry Riley rupture of rapture. They played like it was their final show, as if it was the latest, most drink'n'drug fuelled nightcap possible.

Sly & the Family Drone opted to play on the floor, in the middle of the space, gathering their audience around them in a packed circle. This made visibility low, but their ritualistic primitivism didn't necessarily demand eye contact. It all sounded like one long song, incrementally facilitating mental derangement. Until the climactic stage, it hadn't been clear what was happening, but then they started to distribute their drumkit around the crowd, encouraging simple beats, or more syncopated scissoring, depending on who ended up hogging the flying drumsticks. Their main man, by this time stripped down to boxer shorts, stood atop an amplifier, spraying beard-beer whilst conducting the melee, the invocatory session concluding when he was handed a pizza box and proceeded to plaster a slice to his face, taking art music into a called-for visceral zone, barely sidestepping a wardrobe malfunction. If they'd been up onstage, it would've been a very different experience, but the Sly Drone approach found audience communication to be a vital part of its armory.

Detroit's Wolf Eyes trio tried hard, but there was something lacking, as the band followed on from Alien Whale and the Sly Droners. They seemed to take themselves far too seriously, in comparison, lacking the self-knowledge of the previous pair of socially-challenged outfits. Under other circumstances, the set would have seemed stronger, but Wolf Eyes suffered due to so closely following two of the festival's best sets.

Swans came on after midnight, and played for around two hours. Occasionally they sprawled, but mostly justified the length of their performance, particularly in the light of all Supersonic's other acts keeping down to an hour or less onstage. Singer/guitarist Michael Gira commanded the attention with stern drama, his songs grinding between wall-of-shimmer patterns, hardened into vibrating granite structures, and almost diaphanous ballad sections, poised before the magnification into another bruising ascendance. Nowhere near as loud as its reputation promised, Swans was still quite high on the meter, nevertheless, surmounting a brief power outage before weighing in for the duration. Gira's voice was sometimes subject to a rare challenge in the mix, being one of the few instruments to suffer unintended distortion in Supersonic's general democracy of sound. Or perhaps by 2:00 a.m., your reviewer's tender eardrums had been pummelled way too hard.