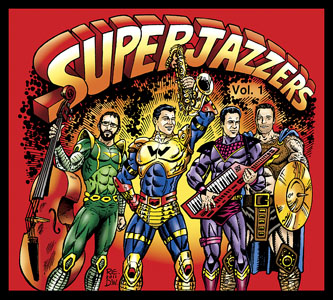 A scenic and vibrant city nestled in a landscape of lush scenery, Portland, Oregon is not exactly known for its jazz scene. However, Superjazzers' Vol. 1 represents the city with a depth and refinement normally associated with the jazz greats in New York, as well as other major jazz towns.

Although group name implies a silly sense of sarcasm, don't be fooled. Instead, it belies an emotional depth, conveyed in the set's nine original compositions.

Superjazzers—a saxophone/piano/bass/drums ensemble—will appeal to fans of pianist Keith Jarrett's 1970s European Quartet. Tim Willcox's saxophone sings and, at times, broods passionately and inventively in the vein of Jan Garbarek, as well as modern master Rick Margitza,while pianist David Goldblatt carries shades of subtle piano icons such as Jarrett and Fred Hersch. Holding down the harmonic and rhythmic force of the group, bassist Bill Athens and drummer Charlie Doggett work together masterfully, to establish a lush and fluid backdrop that ebbs and flows flawlessly with the quartet's dramatic musical landscape.

Although the album is consistently strong, standout tracks include the gorgeous, melodically shifting waltz, "The Rain Before it Falls," as well as the high-energy jaunt, "Vast Crap Perfume Universe." Unlike many jazz albums, this is anything but a straight- ahead blowing session. An unmistakable atmosphere and free-flowing approach tie the tunes together, ensuring that not a single track sounds out of place within the set.

Boasting world-class compositions as well as a strong sense of modern jazz history, Superjazzers' Vol. 1 forges its own path in the realm of contemporary improvised music.