By ROBERT IANNAPOLLO
January 12, 2010
Sign in to view read count 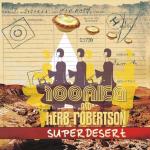 Herb Robertson has to be one of the most intrepid trumpeters around. He seems to be most willing to put himself in anomalous situations: the two-trumpet group he shares with Dave Ballou (MacroQuarktet), work as a sideman in various groups, membership in ad hoc assemblies like a trio with Evan Parker and Agustí Fernández or guesting with Pierre Dørge's New Jungle Orchestra. On Superdesert, Robertson collaborates with the Polish trio 100nka.

This reviewer was unfamiliar with 100nka (guitarist Tomek Les, bassist Adam Stodolski and drummer Przemek Borowieki) prior to this release. Based on this recording, they're a scrappy group, seemingly concerned more with splintering sound and rhythm, textural explorations and group interaction than with standard improvising. Robertson and the trio are clearly on the same wavelength as, in his own music, the trumpeter seems concerned with these properties as well. One hears lots of improvisation but very little soloing on this disc; it's true group music. There are long periods of quiet, tension-building explorations that are abruptly shattered by full-tilt aggressive explosions. (i.e. the first three tracks that lead into "Donkey Shit").

Much of Superdesert is filled with short pieces (in the one- to three-minute range) with lengthier explorations interspersed. Perhaps the most standard piece would be "Dog Shit" where Robertson is to the fore, sounding (surprisingly) a bit like Miles Davis in one of those languid interludes during his Agharta (Columbia, 1975) phase. The 13 pieces flow and jam into each other with artful deliberation belying their improvised natures. While much of this is off-the-cuff, it sounds like a lot of thought went into the sequencing and if there may be some reference points (Davis, Ornette Coleman's Prime Time, a bit of Sonny Sharrock in Les' playing), most of this disc doesn't sound like anything else. And I can't believe I got through this review without making any bad jokes tied to this disc's shitty song titles.