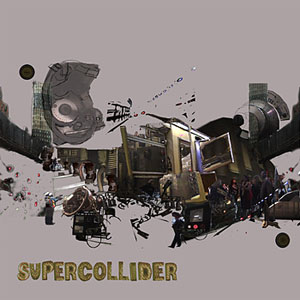 Supercollider is one of the most popular and distinctive jazz groups on the Colorado Front Range. A refreshing blend of jazz, blues, funk, and rock, Supercollider's music is both melodic and powerful, with an energetic frontline and a soulful vocalist who digs deep. This is a group that can embark on a twenty-minute high-wire jazz jam, follow up with a heart-melting blues vocal, then bust out a funk explosion that propels the audience up on its feet to dance.

One secret to Supercollider's success is a weekly gig every Tuesday at The Laughing Goat, one of the best live music venues in Boulder. This consistency has allowed Supercollider to gain an unshakable cohesion, as well as give the septet room to shape its music and experiment at leisure. In order to keep the gig vibrant, the group welcomes guest appearances from the talented roster of Front Range jazz musicians, including illustrious masters such as trumpeter Ron Miles and pianist Art Lande.

The EP features six of Supercollider's songs; given the group's wide range, this can only represent a small slice of what it can do, but it's a great place to start. Three of the songs feature bluesy vocals from the slightly raspy, down-home Jon Gray, who's also the group's trumpeter. Supercollider could do an album just with numbers by Gray; he's a compelling vocalist who sings with his heart wide open. All three tunes are stately and deep, full of longing and a touch of melancholy.

The other three songs are instrumentals, offering wonderful examples of Supercollider's impressive strengths. These are full-bodied songs with bright, fresh melodies, the kind an audience finds itself humming on the way home. The arrangements are excellent, full of intricate interplay and designed to get a big, fat sound. The group also experiments with dynamics, and is unafraid to turn a song in a completely new direction. Supercollider's strength and passion bursts out with every note; these are songs that get into the bones.

Supercollider is one of the many groups on the Colorado jazz scene that deserve a wider audience. Meanwhile, if you are ever in Boulder, Colorado, on a Tuesday night—hey, it could happen—be sure to stop into The Laughing Goat for some of the freshest music around.