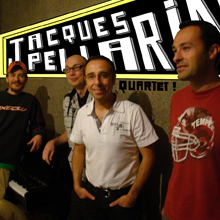 The world of Jacques Pellarin's music, especially on his Sup Dude, is brimming with the ecstasy of his ancient Bayan, that superb button accordion that swings and swerves as Pellarin coaxes the most extraordinary, absolutely joyful sounds out of it. His playing is reminiscent of both harmonicist Toots Thielmans and Hammond B3 organist Jimmy Smith at once. These may sound like strange bedfellows, but Pellarin plays with a sublime sense of chromatic ingenuity when he etches out single note lines replete with deeply soulful grooves and, at times, also dense clusters of notes. These chordal progressions slide out with magnificent glissandi, embellishing the melodies of his extraordinary compositions with such extravagance that they all but fly over the top.

Pellarin is a master technician, but he does not indulge in useless virtuosity. However, his understanding of chordal progressions—the extent of their viscosity and the color- enhancements they make to melodies—is quite superior to most musicians on the Bayan, or on any accordion for that matter. Add to that the fact that he is well versed in the folk and classical romantic idioms, which makes for a powerful talent that has no sense of the boundaries of either music. Put both these characteristics together in the world of jazz music and the magnificence of Pellarin's ability to create vivid imagery and putting metaphor to precocious use increases exponentially.

On Sup Dude, Pellarin's music traverses a wide musical topography and celebrates with equal facility the formal song and dance of Europe, principally France where he resides. He plays as if he were a master chef creating a stupendous dessert, for instance, on "Le Temps de Souffler" or on "So Frenchy." On the latter, he does not shy away from using spiraling motifs rich in irony. Or he might go square dancing, as on "Irish Diversion." His forte, here, however, is the music of Latin America, specifically Brazil where he waxes eloquent on charts such as "Stevenson Bossa" and "Squeezebox Samba." Elsewhere he revisits a world where his Bayan accordion is most at home: Argentina. At great risk of becoming predictable, he throws himself into the tango with miraculous results. His "Tango Addiction" is full of flair, invention, and commentary that is dissonant and funny as he strives—and succeeds—in breathing new life into a sometimes-tired form of folk music.

Pellarin's temperament is wonderfully suited for his sojourns into Latin-American musical territory. Here he is able to show off his emotive approach to music, the depth of his soulfulness and a heart that is almost completely "Latin-American." Through it all, Pellarin remains stoically European in his approach, a characteristic that is marked by unbridled curiosity, thoroughness when executing his compositions, and generosity toward the foibles of folk music born of a rich hybrid that is partly European. This album is superb example Jacques Pellarin's artistry.