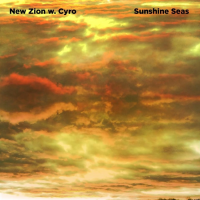 The third release by Jamie Saft's New Zion Trio expands the concepts he launched with his previous efforts, Fight Against Babylon (Veal Records, 2011), and Chaliwa (Veal Records, 2013). His reggae/dub-meets-piano trio explorations expand with the inclusion of Brazilian percussionist Cyro Baptista. This rhythm trance music casts a much larger net, one of universal spirituality, beyond physical matter and the laws of nature.

Without getting all theological on you, the fugue state of roots reggae and dub tap into a universal consciousness and Saft has heightened the hypnotic effect with the inclusion of Baptista. The pair have collaborated on many projects, from John Zorn's The Big Gundown (Nonesuch, 1986) to Electric Masada -At The Mountains Of Madness (Tzadik, 2005).

Here, Baptista brings his plethora of percussive instruments (traditional and hand-made) to the reggae drumming of Craig Santiago, the acoustic bass of Brad Jones, and Saft's keyboards, guitars, and heavy electric bass. Credit also must go to Saft's co-producer Christian Castagno, who adds delays, reverb, modulation, saturation, and compression devices to the sound to give us that true dub sound. The stuff of King Tubby and Lee "Scratch" Perry.

"BrazilJah" echoes with a profound and deep-seated groove and is infused with the vocalizations of Baptista. He augments his bells, bird calls, bongos, triangle, found art, etc., sometimes with a chant, sometimes with something sung/spoken (in Portuguese). The music mixes heavy grooves on "Ranking" with Baptista's Jew's harp. Pastoral acoustic piano and bass are mixed with nimble percussive triangle on "Lamb's Bread," and the full integration of dub with Brazil on the electric "Samba Jahmekya." Vanessa Saft adds island vocals to "Sunshine Seas," which could easily be theme music for any or all warm weather vacations. What dub has always needed is improvising artists like Saft and Baptista. Certainly improvised music benefits here from this reggae/dub/Brazilian connection.