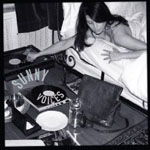 The production of a music compilation or sampler may, despite its producers' best intentions, go either way. A fair representation of artists may result in excellent tracks, together with perhaps some indifferent ones, and there is simply no pleasing everybody. However, it is possible to get closer to the mark of overall excellence if the compilation is a thematic production, or has a very good idea behind it in the first place.

There are not too many of these kinds of records, but Sunnyside Café Series, a compilation of vocal music from Sunnyside Records, is one. There is music from eighteen records here—from "I Could Write a Book," by the legendary Jeanne Lee accompanied by pianist Mal Waldron, to a rare English language recording of "Over The Rainbow," by the bewitching chanteuse Juliette Greco and a hypnotic rendition of "Voce," by Luciana Souza, which features the incessant drone of a superbly played electric guitar. So this is clearly no mere sampler of music from the label. Rather, it feels like a document in praise of the first instrument, the human voice, to celebrate the triumphant human spirit.

There can be no other way to describe the catharsis that results at hearing track after track of truly fine vocals. Brian Cullman sets the stage for this with "The Promise," in a voice that conjures both Hank Williams and Van Morrison. "The Space in a Song to Think," from Rebecca Martin, is another one of those finds; with beguiling lyrics and spare vocals, the song gnaws at the heart and sticks in the memory long after Martin's guitar fades. "Calling You," sung by Linda Sharrock on the soundtrack to the 1990 television mini-series Bagdad Café, ups the ante on the record several notches. Sharrock's voice has a raw edge to it, and as a vocalist she must surely belong to that tribe of storytellers who number among them Abbey Lincoln, Betty Carter and Jeanne Lee.

The musical tapestry of the project moves gently from the blues and jazz of contemporary America to the heartland of European artistry and then the polyrhythms of Africa. The region of Andalusia's flamenco is represented with Martirio ("martyr" in English), who offers up "Si me Pudieras Querer," as she stirs up emotion like a dervish. Lokua Kanza, the celebrated multilingual Congolese singer, is featured on "Nkolo Akosunga." And both Portugal and Brazil are included, with voices ranging from the floating breathy sound of Helena singing "Morrer Nos Sues Bracos," to the eerie falsetto of Milton Nascimento, singing the Mick Jagger/Keith Richards classic, "Lade Jane."

It is all here on the Sunnyside Café Series. If this is—as the title suggests—the beginning of an ongoing series, then there is great expectation of things to come under this banner. Still, even as a one-off production, this is quite a celebration of vocal endeavor.

The Promise; The Space in a Song to Think; Calling You (Theme from the film Baghdad Café; No Expectations; Nkolo Akosunga; Morrer nos seus Bracos; Si me Pudieras Querer; Take It with Me; The Peace of Wild Things; I Could Write a Book; Over the Rainbow; Izaura; Lady Jane; Area; Love Marks; Flutes; Voce; Someday My Prince Will Come.