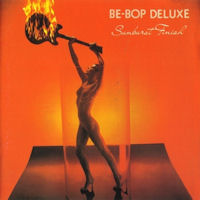 The album opens with the shrewdly arranged "Fair Exchange," which is a piece that glowingly conveys Nelson's diverse compositions, where prog rock, Ravel and a touch of Chuck Berry style rock and roll attain a happy medium, stirred up by a catchy hook and Andy Clark's burly synth lines. Indeed, the band bridged the gap between prog and other less complicated rock-fueled genres during its existence in the 1970s, although Nelson's post Be-Bop Deluxe heterogeneous solo discography has generated hordes of interest resulting in a devoted following for several decades.

On "Crying to the Sky," the musicians execute a dream-laden ballad erected on layers and medium- tempo agility contrasted by the guitarist's distortion-induced soloing that alternates with his heartwarming vocals. Yet the ensemble's signature approach shines on "Sleep that Burns," driven by a galloping cadence, Nelson's howling lead lines, and a smidgeon of cabaret music during the bridge, framed on a prolific theme and thorny motifs.

Be-Bop Deluxe was an anomaly of sorts, where everything but the proverbial kitchen sink often coalesced into cohesive musical statements, augmented by multifarious rhythmic involvement and a party time atmosphere. Critically acclaimed at the time, they also achieved varying degrees of commercial success. It was a band that went far beyond the call of duty as advanced musical concepts, innocent pop renderings, torrid solo spots, and concise genre-hopping movements made perfect sense amid the artists' jubilant underpinnings.

A timeless and highly recommended outing.