By KARL ACKERMANN
September 10, 2018
Sign in to view read count 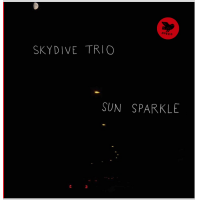 Norwegian guitarist Thomas Dahl's primary project is the Skydive Trio with bassist Mats Eilertsen and drummer Olavi Louhivuouri. The trio is an off-shoot of a quintet of the same name that includes tenor saxophonist Tore Brunborg and pianist Alexi Tuomarila. Sun Sparkle is the second release from the smaller group whose sound, like the album title, reflects ideas from both familiar and eclectic musical worlds.

Dahl has collected a number of honors in his native land, including Norway's Spellemannprisen, (a version of the Grammy Award) for the album Low (BP, 1999) with one of his two additional jazz groups, KRØYT. The most recent of Eilertsen's four solo releases was his 2016 Rubicon on the ECM label where he has also worked with Jacob Young and Tord Gustavsen. Among others, the Norwegian multi-instrumentalist has recorded with Nils Økland, Food, with Iain Ballamy, and Yelena Eckemoff. Finland's Louhivuouri has released seven albums as a leader, four with his group Oddarrang and one with his namesake trio. He has also played with the UMO Jazz Orchestra, Tomasz Stanko, Anthony Braxton, Jon Balke, Marilyn Crispell, among others.

At the heart of Skydive Trio is Dahl's exceptional and wide-ranging guitar playing, often bringing Bill Frisell to mind, but varying as much as the music itself. There is the idyllic beauty of "Convoy," "Spruce" and the title track, the former drawing logical comparisons to early Pat Metheny. While the opening "Launch" is a jazz-rock hybrid, the slow-building "Descending" and "Ascending" are more overtly driving rock pieces. Harder to categorize are "Apollo," "Surface Stride" and "Engine Rest," the latter two heavy with spacey atmosphere.

There is nothing ground-breaking on Sun Sparkle but there needn't be given the exceptionally high quality of the musicianship and the diverse selection of original music. The Skydive Trio is a solid group, capable of generating hard-charging drive and airy harmonies in equal parts. Louhivuori is the conduit in keeping the overall program cohesive and Eilertsen proves to be as fluid a player as Dahl as he moves seamlessly between the bowed, plucked and electric basses. Sun Sparkle, like the preceding Sun Moee (Hubro, 2015), is good listening from beginning to end.