By WOODROW WILKINS
December 2, 2007
Sign in to view read count 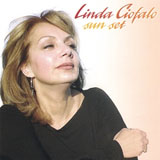 "Sunny, in addition to being a description of the weather, can be used in reference to a positive disposition. Linda Ciofalo creates a sunny atmosphere with Sun Set. Complemented by a small ensemble of sidemen, she delivers an album worthy of Janis Siegel or Tierney Sutton.

Inspired by a televised appearance of the legendary Sarah Vaughan, Ciofalo took an interest in vocal jazz in the 1980s. She earned a spot in a big band jazz orchestra, which led to her career as a New York nightclub singer, also performing at social functions, private parties and political fundraisers. In addition to her performance and recording career, music education is part of Ciofalo's universe. She has been a music teaching artist at the Lincoln Center Institute and head of the jazz vocal program at Cultural Arts High School on Long Island.

On Sun Set, Ciofalo is backed, in various combinations, by John di Martino on piano, John Hart on guitar, Marcus McLaurine on bass, Joel Frahm on saxophone and Matt Wilson on drums. The music is a mix of Broadway tunes, jazz standards and covers of pop songs.

Frahm's soprano sax helps set the tone of the delightful "Oh What a Beautiful Morning, from the Rodgers & Hammerstein musical Oklahoma. Ciofalo's voice is like a flute that can speak. Frahm delivers a passionate solo during the instrumental break, wherein the other musicians show a little individuality while maintaining focus as a group.

Though still very much a jazz arrangement, the cover of the Beatles' "Here Comes the Sun enjoys a pop feel, thanks largely to Hart's guitar solo.

Often, vocal jazz is dominated by the human voice. The sound may be good, but when the musicians are stuck in the background, there's little to differentiate the music from pop or R&B. Not so with Sun Set. Ciofalo is clearly the star of this show, but the sidemen get plenty to work with. Whether in the background or performing a solo, each musician contributes significantly, striking a perfect balance between vocals and instruments. And it's all done with a love for the art and a sunny outlook.

Oh! What A Beautiful Morning; You Took Advantage Of Me; Orange Blossoms In Summertime; Here Comes The Sun; Comes Love; Love Is Stronger Far Than We; La Isla Bonita; I'll Follow The Sun; Midnight Sun; Lazy Afternoon; Blame It On The Sun; The Last Day Of Summer.